﻿
.....would prove to be my entertainment for the afternoon. So, back at Chuck and Emily's from the Simpsonville 8K Sunrise Run....breakfast was done and naps were done. Cliff and Chuck needed to prepare for their Tri in Greenwood. So, while they took their bikes to Greenwood to be placed in the transition area for the next day, Emily, the girls and I went to Target. Emily needed to pick up a few items that Claire needed for camp next week.  Remember the girls? Claire is 6 years old and Charlie and Cloe, the twins, are three years old. This should be epic. HeHe!!

Apparently, the girls used the car ride to Target to think about their shopping trip. They were all excited.....making mental notes of what they needed, I'm sure. Once inside, Emily had to get the giant buggy so all the girls had a place to sit. First stop, popcorn and icees. Two blues and one pink. ~Giggle~

Now you have to picture this....Three little blondes all hyped up on shopping. Claire was intent on her list for camp and looking forward to spending her $7 that she brought along for a notebook and colored pens. The twins....long blond hair, dainty and petite, binkies in mouth and wide eyed to the wonders that Target would provide for these little shoppers.

The girls began chattering, oohing and ahhing over the things they saw. Charlie was contained in the child's seat of the buggy, but Claire and Cloe could move about freely. Cloe, one of the twins, needed everything...so she thought! ~Giggle~

She needed a bathing suit for the pool, a chair for the beach....no, wait....for the pool, no...yeah, for the pool. ~Giggle~  She needed sunglasses for the pool. She needed fruit gummies and crackers for snacks. You get the picture. I laughed at Cloe every few minutes. I couldn't help myself.  Really it's because the last time I saw the twins, they were barely talking and now they were not only making full sentences but, could carry on conversations.....and most definitely shop with the best of them.

Cloe lost her flip flop 3 or 4 times and just when we thought we had that under control, Claire lost one of hers. ~Giggle~  Charlie wanted to walk a bit and ended up stumping her toe on the buggy. Bless it...melt down. I know Emily must have thought I was sadistic or something, because I couldn't help myself....I just giggled. Charlie was back in the buggy now and Cloe was back to shopping and needed a water bottle. It's just the way she says it......~Giggle, Giggle~

Now, I don't know if Charlie had just had enough of the laughing or she really thought I was somehow making a mockery of her sister, Cloe. Because all of a sudden, Charlie threw me a look and said, "Don't laugh at my sister"!

Put in my place! That just made it worse! ~Giggle, Giggle~

Well, two hours later and the Target shopping trip was done. I proceeded straight to Starbucks and two Grande Iced White Mocha coffees later, we were on our way home. 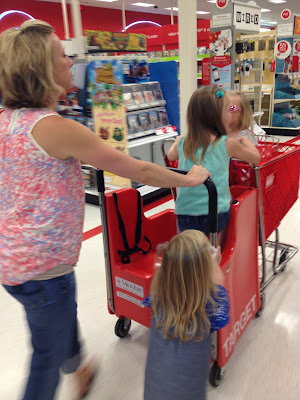