Run with the Sun! 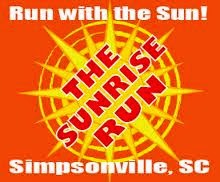 ﻿
Our plan for this past weekend was to spend it with our friends Chuck and Emily. Cliff and Chuck were doing a triathlon in Greenwood on Sunday and then all of us were running the Simpsonville Sunrise 8K Run on Saturday, except Chuck's wife, Emily. She had good reasons. You'll see why in a minute.

Tropical storm Andrea sort of followed us up the coast, Friday, until we turned west and arrived at our destination in the upstate. Our friends Chuck and Emily live in Clinton, SC. A very pretty area. Lots of green countryside and slightly hilly. Chuck and Emily are the proud parents of three pretty little blonds. Claire is six and the twins, Charlie and Cloe, are three.

Chuck and Emily had planned for us to have lunch at a quaint little diner in town called, Jitters.....known for their sandwiches and the cute little gift shop that was also housed there. We were surrounded by Beanie Babies. Before leaving the diner, the twins scored two of them...... because Charlie needed a sheep but, settled for a kitty named Mimi. The sandwiches were awesome....I had the veggie wrap. Yum!

Plato was one smart cookie! His quote "Necessity is the mother of invention" couldn't have rang truer for Emily, mother of twin 3-year-olds. Although she didn't invent it, the concept is awesome. Have potty...will travel.

Sometime during the ride back to the house to put the left over sandwiches in the fridge, one of the twins needed to go. Well, veteran moms and especially those of twins have to be organized and anticipate events well. Emily? She's one of the best of them. She travels with potty in tow. Twin #1 sat on the potty and proceeded to.....well, you know....go. All of a sudden, seemingly oblivious to the fact that one of his girls was going potty, Chuck sniffs and says, "Charlie? Did you go poo?" And yes, of course, Charlie did. So Emily informs him that he has to pull over to empty it. We couldn't be bothered with odors and such. So Chuck stopped in a gravel driveway in an out of the way area and as luck would have it, in a puddle of water. This puddle of water proved to be a life saver because Chuck had to not only empty, but rinse the potty out.  We laughed! Well, Chuck didn't. So, we just laughed at him.  If you've ever been the parent of small children, then you know that certain events creates trends. Sort of like monkey see, monkey do. And BINGO! We got almost back to the house and Twin #2 had to go potty. Which she did just as Chuck pulled into his driveway. Emily asked him to grab some diaper wipes, when he took the sandwiches inside. After getting back to the car, Emily told Chuck to empty the potty a second time. He did and it didn't go far this time....as a matter of fact....it landed on the driveway. Chuck said, "Dang, good thing I got the diaper wipes. That just splashed back up on my leg". He's a good daddy sport. The saying about "what happens in the car, stays in the car".....well, not so much. Ha! We laughed again!!

Next, we headed over to Simpsonville to pick up our race packets. Chuck drove the race course so that we could get a feel of what to expect the next day. Oh boy, I sure didn't know what I signed up for. This was going to be a hilly race. Heart palpitations began to manifest. Emily quickly bowed out due to the fact that she wasn't sure if she would have a sitter. She gave a strong argument. But, I really think it was those hills that had her stomach churning. She was the smart one.

Emily's mom came over to watch the girls that evening as we headed out to our pre-race dinner. Dinner was on the porch of a lovely Country Club restaurant overlooking the greens of the golf course there. In addition to the beautiful scenery that surrounded us, the porch ceilings hit a chord with me. They were painted sort of a robin's egg blue, much like those you see in the row houses of Charleston. The ceiling was dotted with ceiling fans that were the perfect accompaniment to the nice cool evening we were enjoying. We talked about our plans for the next couple of days and tried again to talk Emily in to running the 8K with us. But, with three little ones and in particular twin three-year-olds. She found it rather impossible, especially knowing that we had to get up at 4:45 the next morning. The race was about a 30 minute drive from their home and began promptly at 6:30 am on Saturday. 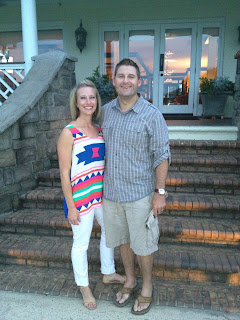 
Well, anyone who knows me knows that I just don't do early mornings so well. But by His wonderful grace, I would do my best. The alarm went off and my first thoughts were..."What was I thinking? Can I back out and just go back to bed?" And, I didn't feel nervous, but the gut did. The nerves showed up just as I was trying to choke down a little oatmeal. A rebellion was going on in the alimentary canal, y'all. It didn't want any part of that oatmeal! As usual, I mustered up everything I had and finished the task of dressing and gathering my race things. Somewhere on the drive over, the nerves decided to calm down, but wanted one more stop before lining up for the race. All that taken care of, we lined up and were off. Adrenaline is my best friend at races. It gets me started way too fast at times, though. But today, I needed it. And I was depending on adrenaline to carry me for much of the race. A sunrise race is just that, it began at 6:30 am. It probably took me a couple of miles to wake up and get my muscles warmed up. And then there were those hills. Living in the low country, hills are few and far between. However, at Lakewood, there is one and albeit short, a fairly steep hill. So, I have incorporated it into my runs. Good thing. Because that little bit of hill training came in handy Saturday.

A few highlights:
Mile 1:   I passed a man that was grunting and moaning so bad that I had to keep looking back to make sure he wasn't having a heart attack.

Mile 2:   We started downhill. Hallelujah, oh but wait....if there is a downhill then that means there's an uphill. And there would be several. Thank heavens....a water break. Walked through it, but only for about 10 seconds.

Mile 2.5: Someone had a sprinkler set up at the edge of their driveway for us. Quick run-through shower....awesome!

Mile 3:   Had to take a 15-20 second walk break uphill. Took the opportunity to take a GU Gel. Chocolate. Yuck!! Sweet!! Downed it with some Gatorade. The taste lasted only a second or two...the hopes that it would give me enough energy to make the rest of the hills lasted for the last 2 miles.

Mile 4:   Another big hill, walked it for about 10-15 seconds. And then we were in the home stretch. I think I felt the GU Gel kick in about this time. I sped up slightly and started passing people that had been playing the "cat and mouse" game with me for pretty much the whole race.

Mile 5: The finish line..... Cliff was there with a few cheerleaders, cheering the runners in. He told them to look for me. As you can imagine, I was surprised to hear them chanting my name as I ran to the finish. Made me run even faster! Never underestimate the power of encouraging words! 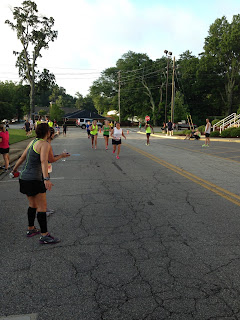 Approaching the finish line.....Cheerleaders on the side..... 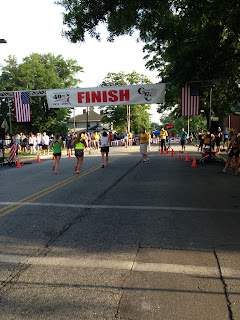 And there it is, Hallelujah!
The finish to a Good run!