Wouldn't You Like To Be A Fly On The Wall? 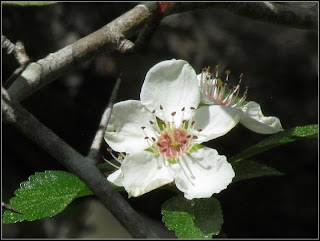 I certainly can't take credit for this gorgeous picture. But it does give a clear indication of the beautiful spring we are having. The photographer who snapped this gorgeousness is David Thebeau.

David, I hope that when you read this that you might leave a comment and a link so that the folks who read my blog can enjoy the wonderful pictures you take. Thanks again, for letting me use it!

Just a side note: If Frank Eaton reads this and cares to leave a link, he takes gorgeous pictures too.

Sunday 4/14/13 - Today, the training group I'm a part of ran the "Magic Mile". Yeah.....I know, I had never heard of it before, either. To run the magic mile, you must run at a faster pace than normal. You may not be able to hold a conversation, just mutter words like....I'm OK or OMG or My LUNGS! But, it's not a sprint, either. The point was to run it so that the coaches can give us feed back as to how fast we may run the Divas 5K next Sunday. I ran the magic mile in 10:22 minutes. This is definite progress for me. And as I posted earlier in the week on facebook....my legs were happy, but my lungs were ticked off!

I've written about my best sista/cousin before. We have crazy fun adventures together. I love that girl! Well, she received some bad news recently. She has been diagnosed with lymphocitic leukemia. It is slow growing and it appears to be in the early stages.We have all been in shock. I tell you this because we believe in the power of prayer and I am asking you all to please keep her in yours.  In the meantime, my youngest daughter sent me information about a documentary she became aware of called "The Gerson Miracle". I have believed for sometime now that we can heal ourselves with food. This documentary just further validates what I believe. If this piece of information can help but one person, then I've considered it to be a success. If you or someone you love has cancer, please, please watch this documentary (found here on Netflix). It could be the one thing to truly make a difference.

And if I've peaked your curiosity about our adventures, you can read more here (Sista Adventures).

Monday 4/15/13 - I ran an easy 2 miles today. After my run, I came back to watch some of the Boston Marathon. It was, of course, later in the day that I heard of the tragic and senseless evil that took place near the finish line. My thoughts and prayers go out to all that were harmed and to the families of and to those who lost their life that day. I grieve with them. I am relieved that the bomber was caught and I pray justice will prevail. It is certainly sad and heartbreaking that not only did innocent people get killed or hurt, but also sad and heartbreaking that such a young man was easily influenced by evil. His uncle said that he hopes his nephew will ask for forgiveness. I do too. He will get what is coming to him, here on earth. He will pay! But, what kind of Christian would I be if I did not also hope that he would seek for and receive forgiveness?

Tuesday 4/16/13 - Today, I decided to add something else to my list of goals. I want to ride my bike with a group called " WomanTours ". This organization hosts bike rides all over the United States and around the world. It is a "women only" bike tour. The tour I want to do, first, is called the "Northern Michigan" tour. It is a 7-day inn tour that traverses along the shores of great Lake Michigan. You bike nearly 40 miles/day. Your lodging, most meals, park fees, van support, and trained guides are included in the price of the tour. Lofty? Oh yeah! But I have all summer to train. In order to do the tour, they recommend you be able to ride 20 miles at one time. Well, I'm half way there. Northern Michigan, here I come!!!

Thursday 4/18/13 - I did yard work today. Cleaned out my front flower bed. That is major exercise, y'all! My hamstrings are so sore. I called a landscaper about raising the flower bed and adding stone to the facade. Supposed to touch base with him again this week as he was way busy last week. We have a little vacation place at the beach and because we spend so much time there during the summers, I had decided not to plant a garden this year. I just can't keep up with it, if I'm not there. My gosh, I do love a garden and fresh garden vegetables, though. So, as I was milling about the yard today, I began to rethink the decision not to have one. The dirt is calling my name. I may break. 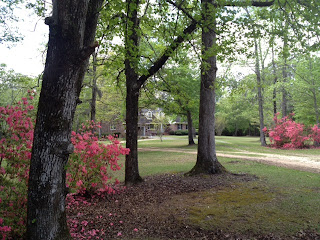 It's a pretty Spring at our house.

Friday 4/19/13 - Began organizing my office/scrapbook/sewing room. Headed back to the beach. Met Cliff for lunch in a little cafe in Pawleys Island. I love fried green tomatoes, so when I saw that on the menu...I perked up. I ordered the fried green tomato with pimento cheese sandwich. Yuck! I was never so disappointed. Anyway, we mozied on. After arriving at the beach, I took off on a 2.6 mile run, then a 3.43 mile bike ride.  I'm in the zone, y'all. Watch out, cause Northern Michigan.....here I come!

Saturday 4/20/13 - Rode the bike 8.67 miles while Cliff ran. He encountered a crazy man walking towards him. He said the man approached him asking directions to sand dunes. Cliff told him he didn't know where he was talking about. The man asked Cliff how he could not know about sand dunes. Cliff asked where he came from and where he was trying to go. The man didn't know. So Cliff offered to call 911 for him. The man left with his hands raised above his head, shaking them. Just a few minutes later, I saw the same man still waving his hands above his head and walking into the woods. That was scary. I'm glad Cliff was there or I might have had to run over him with my bike. Ha! Maybe not. I've already wrecked one time and broke up my arm. I don't think I would risk letting "crazy man" take me out, again.

And this my friends.....is just some pure randomness....but it's what goes on in my "wouldn't you like to be a fly on the wall?" life. 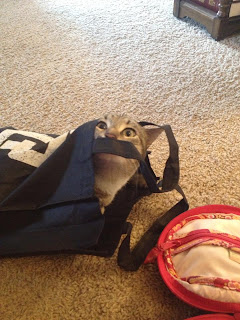 You remember, Kitter, right? Whitney, my daughter in Denver, posted this to facebook. She called it, "The Face of Insanity". Ha!

You can read more about Kitter (here). 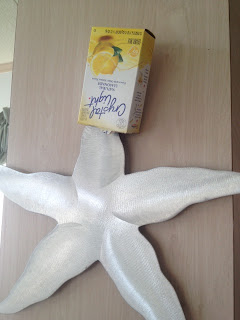 And this is Cliff's way of telling me we are out of Crystal Light. Ha! He's obviously feeling better. You just never know with that man.

Hope you all had a great week. I'm excited about the warmer weather and the prospect of laying out on the beach soon! Woo Hoo! Gotta go now, I'm off to run with my training group.