I Left on a Jet Plane

The red tail lights were headed for.....no not Spain. Denver. What's wrong with you? Yes, I took a little trip. I was Colorado bound! And although many of my adventures are stories in their own right, I think this one just says....keep it simple, LaLa.

The flight out was unremarkable. I usually like the window seat, but since this trip was a spur of the moment kind of deal, I was unable to purchase one. I had the middle seat all the way. And if you are the least bit claustrophobic, this seating arrangement will definitely rub you the wrong way. I twisted and turned, crossed and uncrossed my legs, fidgeted with my bag and boarding pass. That's when he saw it.... The guy next to me was paying attention to MY boarding pass. He asked, "So, what you gonna do in Denver"? Have mercy, that was creepy! But, I replied that I was visiting my daughter and that just opened the door. His foot was in and there was no stopping him. He talked my ears off for the duration of the flight. Turns out that he was an employee of  US Air. He was the manager for the group that loaded the luggage onto the planes. Oh wait, I had an exclusive.....Yep, I was the first to know that American Airline was merging with US Air.

Soon enough we were on to Denver. Stuck in the middle seat again. This time...a sweet little lady had the window seat, but the light was too much for her. She kept the little blind closed the whole time. Uhhgg! The not so little man on the aisle seat decided he needed a little libations. He ordered one cup of coke and added two mini bottles of Jack Daniels to it. I was paying attention! And, I was waiting for that to kick in. Ha! And when it did.....he started talking to himself. And every once in a while, he would shake his head vigorously back and forth. I scouted out the flight attendant's call button, just in case.

My daughter has a cat. Her name is Kitter and apparently she is a stealthy little thing. Sketchy at best. She lays claim to the guest bedroom except when I'm there. Then, she gets shut out, as in....close the door and keep it closed. Well, I had to get up in the middle of the night for a.....umm, you know.....a visit to the loo. I kept the lights off because I didn't want to wake Whitney and Jason. I'm good at creeping around in the dark anyway. But upon returning to bed, I spotted something dark on the floor out of my periphery. OMG! It was moving! Yikes, I pulled up the covers kind of tight. It looked like a black ghost......like a black ghost Kitter. "Jeez, Kitter, you are creeping me out. How did you get in here"? I later discovered that the bedroom door wasn't closed all the way and Kitter is good at pushing it open just enough. Lesson learned. 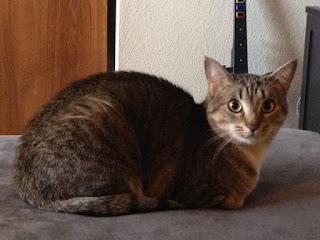 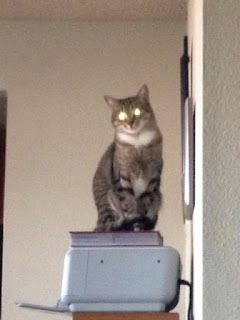 I slept with the window cracked open, y'all. It felt great to have that very cool mile-high air enveloping the room as you're bundled under the warm covers. Only.....my thoughts went back to the night before. I hope Ghost Kitter can't sneak in through the window. It was pure chilling. But with that fresh mile-high air and all, sleep came so easily.

Shopping for some new hiking shoes. Score! And, you know that when mama comes a calling....that she comes a cooking. I made egg sandwiches for breakfast and home made chicken noodle soup for dinner. My child and her husband loved me! Later, we saw the movie "Identity Thief". What a hoot! 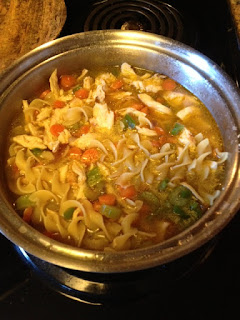 Forth day in Denver:

We had a full day Saturday. Whitney and I started by going to the gym. I've been running and despite a little knee problem, I felt like I was physically in good shape....at least enough to do 30 minutes on the elliptical. Well, HELLO!  I did the 30 minutes and then had to call 911.... The 911 conversation in it's entirety: "Hello 911, send oxygen! Fast!! 30 minutes on the elliptical and I'm pretty sure I've developed mile-high lung syndrome, rubber leg syndrome and I've gone blind." They were slow to respond so I gathered my belongings and heaved all the way back to Whitney's. After getting cleaned up and my breathing returned to normal, we went to a painting class. That was a lot of fun! It started snowing while we were there, but was finished by the time we were. Later, we took the light rail downtown to have dinner at The Old Spaghetti Factory. Oh my, Yum! 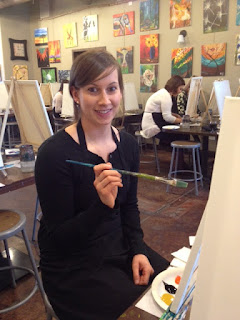 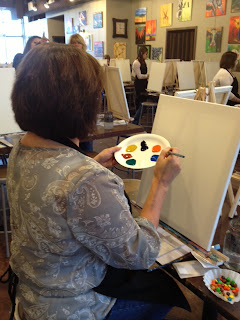 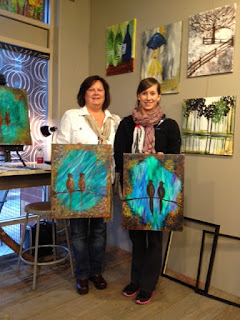 And these are our finished paintings. That's Norman......2nd bird from the left. Kitter made friends with Norman. She was a little intimidated, 4 to 1 odds that if she didn't, she was going to get a nasty pecking.

I wanted to play in the snow and after a disappointing lack of snow in Denver (they only got a dusting), we had to look elsewhere....so we headed towards the mountains. We were trying to make it up to Mt. Evans, but the closer we got the more ice and snow were on the roads. We decided it was a little too scary to try to go all the way. So we turned around and found a small camping area in the Arapaho National Forest just outside Idaho Springs. I got my snow fix. Then I got my Starbucks fix. And, since we had a pretty big lunch, we decided that I would just make some "Hissy Fit" dip and chips for dinner and finish up the chicken noodle soup. If you read my post "I'm still cracking up" then you know I'm vegetarian. And you'll understand when I say....I picked around the chicken. Ha! Ha! 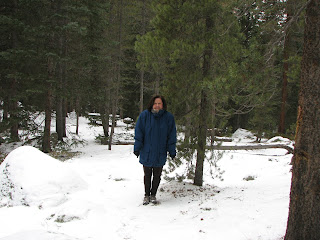 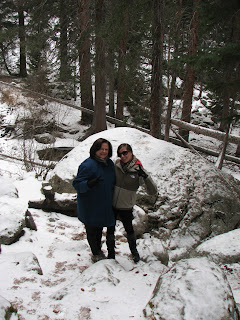 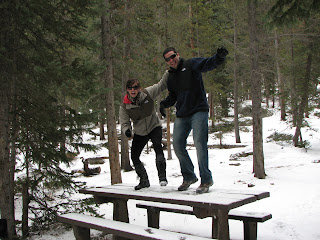 Whitney and Jason, aka ski bums. 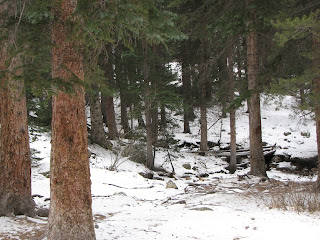 The kids had to go back to work, so I relaxed with the Kitter and read pretty much all day. Kitter and I had come to an understanding. She could lay on my lap and sleep, but my bed and luggage were off limits. She came to terms with that. And we meshed just fine. For dinner I made Buddha Bowls. Yum! You start with rice, add black beans, chopped tomato, chopped cucumbers, celery and avocado, corn and cilantro. Top it off with a little lime juice. Crazy good! Uber healthy!


This was a very long travel day. It began at 5 a.m. I left Denver and had a layover in Newark, NJ for 3 hours. I took a few pictures of what looked like the Empire State Building. I was pretty sure New York was just over the river. Maybe one of you guys can confirm this for me. I've included a picture of what I saw below. After leaving Newark, my next stop was Charlotte. This ride got a little bumpy. I didn't need any Dramamine which was a good thing considering I left it at home. But from Charlotte to Charleston, it was so bumpy that the flight attendants never came around with the drink carts. A few more minutes on there and I would have paid $5,000 for a Dramamine. Alas, by 9 p.m., we made it to Charleston. And there waiting was my wonderful hubby ready to take me for home. 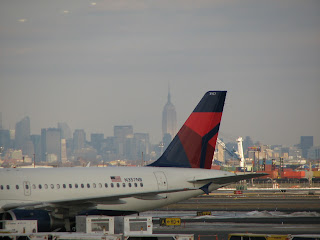 View from Newark, NJ airport. Is that the Empire State Building? Someone, anyone?

It was a lovely trip, but I was happy to get home.


And then, just today, Whitney calls.... "Mama, I think you need to come back. Jason has a nasty virus and needs you to take care of him. I'm Lysoling the crap out of everything and walking around the house wearing a surgical mask. I don't do viruses".