The BFF 10K Race Report and Near Beach Catastrophe 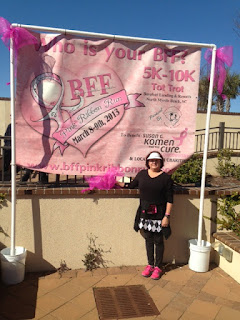 I did it! I ran my first 10K race and accomplished all the goals I set for myself, which were conservative to say the least. I am a slow runner! One of my goals was to finish in under a 13 min/mile pace and I did. I finished with a 12:56 avg. min/mile. Another was to run the whole 10K and I did, except for walking through the 2 water stations (I was told that didn't count). And lastly, I did not want to finish last and I did not. ﻿

I ran this race in honor of my cousin, Terri, who is a 16-year breast cancer survivor. I can not imagine going through such a terrible disease. My husband, Cliff, ran this race too. That made it even more special. At the starting line on our mark, I declared out loud....."Terri this one is for you, honey"! And so we began. 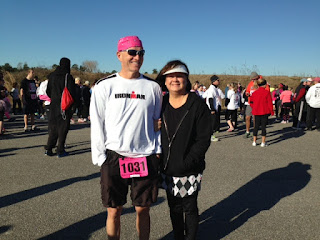 Cliff and I
And yes, he's wearing a pink bandanna. He had to represent.

Mile 1:  We had only just begun and I caught up to a friend who was clearly having trouble with her left thigh. She said she was going to try to run my pace, but she couldn't even do that. I mentioned for her to try to stretch it out, but she had to stop...she couldn't go any further. I kept on, but at the end found out that she had to be taken off the race by golf cart. Later, we found out that she went to the hospital and for an MRI. She didn't know it at the time, but had a stress fracture in her left hip that was an injury that happened a couple of weeks earlier. Monday, she had to have surgery. It appears that she will have a full recovery. And I'm so happy about that! God speed!

Next, maybe a tenth of a mile into the race and what do I see? OMG! It was a bridge! Man, they don't mean to make races easy, do they. I made it up and over and felt pretty darn good that I conquered Mt. Kilimanjaro. The  group I came with...left me long ago.....even my own husband. What? So, I was a lone ranger for most of this race.

Mile 2:  Some tall lady passed me early on. She didn't get completely out of sight. I could see her the whole race.  I've had a cold and some sinus issues and had to breathe through my mouth. Boy was my throat dry. I wanted water so badly.  An innocent bystander said, "Water was just ahead". She must have heard me heaving a mile away. I started silently singing "Amazing Grace, how sweet the sound"!

Mile 3: Water refreshed and I'm on my way again. I noticed somewhere around the half way mark that the previous tall lady wasn't getting any farther ahead. I really wanted to keep her in sight because at one point she and I were the only people on a particular stretch of the course. I didn't want to get lost.

Mile 4:  I had to remind myself that if Terri went through every thing she had to and survive that surely I could run 2 more miles. Again, my mantra for the day was....Terri, this one's for you. Water refreshed again and then all of a sudden I noticed I was slowly gaining on tall lady. So, I'm not sure if it was from me speeding up or her slowing down, but at mile 5.........

Mile 6:  And now for the finish. I rounded the last curve and there comes Cliff, running back to meet me. Now, how sweet is that? He ran the last 2 tenths with me.

Mile 6.2:  At the last moment he took off ahead and was able to get a couple of pictures as I crossed the finish line. A few friends was there waiting for me to cross and that was sweet too. I even sprinted that last few feet. Ha! When I crossed the finish line, I declared, "Ooooh Jesus!" and  a couple of the folks there perked up. Not sure if they thought I had spotted Him or was about to go meet Him, but boy did I get their attention. 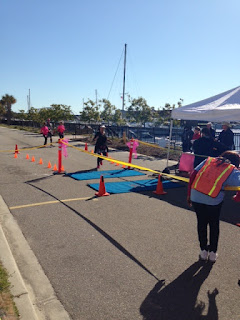 Now y'all, that was a good day. The festivities afterwards were fun. They gave out beads, balls and t-shirts and had good music. And then the awards. Several in our group of friends received medals. My husband, Cliff, received a medal for placing 2nd place in his age group. Go Cliff! This was a fun race for a good cause. I think I'll do it all over again, next year. Maybe next year, Terri will run it with me...... 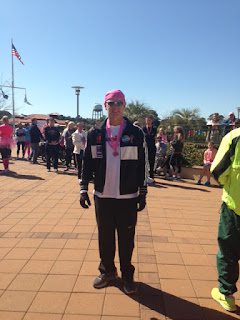 Later that day, Cliff and I were babysitting for our grandchildren Lidia and Sawyer. One of their favorite pass times is to go rock climbing at the swash down on the beach. 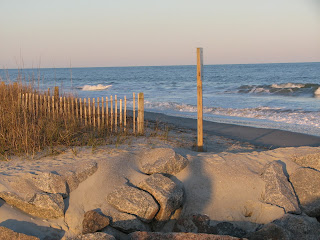 So, we drove the golf cart down there and let the kids play. 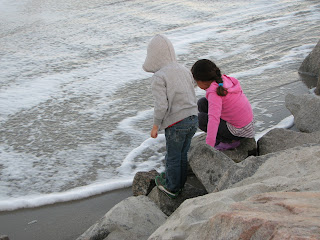 I was about to freeze to death and voiced it, heavily. Finally, Cliff had heard me complain long enough I guess and said that we could go. Well, he had a bright idea of driving the golf cart on the beach. No problem at first, but then it started slowing down. Lidia and I were on the back and could smell something. Cliff started noticing too and said that something was wrong. We got almost to the access where we could get off the beach and he yelled, "get off"! We all bailed! There was smoke coming from the golf cart. He lifted the seat and sure enough there was a fire. And then he reached down and picked up a long stick that was laying across the batteries. It was on fire, too! Lord, this man is smart. He's a mathematician for crying out loud. And he stores Sawyer's stick on top of the batteries?  But hey, I can't say anything I guess because I had the camera hanging around my neck and didn't get the first picture of the whole near Beach Catastrophe.....not until after he contacted the guards to help us get the golf cart off the beach and had to tow it home. Cliff towed and I drove the golf cart or rather steered it. Lord, that was so funny. We were laughing and snapping pictures of each other. Sawyer was whining, "My stick is on fire. Now what am I gonna do"? Lidia looked at me and said, "Now that's something to write about". Ha! And so I did.

Funny story and a near Beach Catastrophe averted! All in a day, in the life of LaLa. 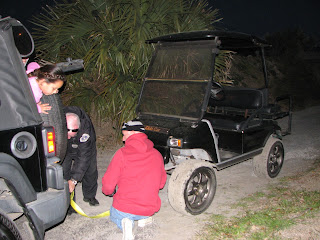