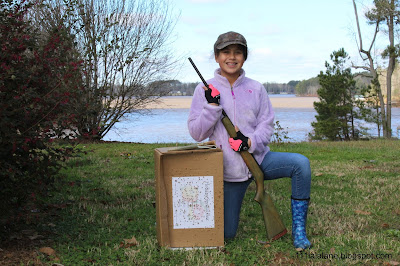 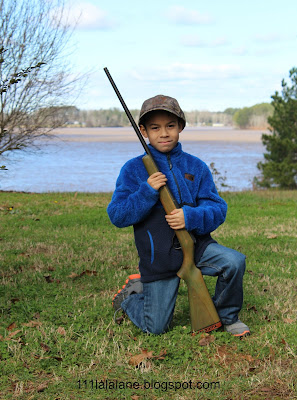 It all started when Cliff's daddy was a little boy. Hunting was a way of life in those days. Mr. Clifford's father carried him hunting for ducks and squirrels. This tradition was passed down to Cliff as the only boy in his family.  Mr. Clifford had always told Cliff that he wanted him to have his guns and when he passed away, Cliff inherited them.  It was something they shared as father and son.

Years later, Cliff is now passing down the knowledge and traditions he learned as a boy, from his father, to our grandchildren.

Cliff and I believe in teaching Lidia and Sawyer useful skills that they can carry into their adulthood. I've taught Lidia how to sew, knit and cross stitch. She's been learning how to cook, also. She will make a great homemaker, one day, if she so chooses. Cliff has been teaching them how to start a fire and cook outdoors, in their camp in the woods. He has been teaching them to fish. And just last weekend, he taught Sawyer and Lidia how to handle and shoot a 410 Shotgun, for the first time. He even saved the shotgun shell and wrote a little note on it saying that it was their first time shooting the 410. He has a treasure box for each of them with things he's saving and the shotgun shell will be saved there. The 410 shotgun, pictured above, was Cliff's first gun. He received it when he was a little boy...just 8 or 9 years old and has made many, many memories hunting with his daddy and using this gun. Hunting for Sawyer is only a season away. I'm not sure that Lidia will find it appealing, but shooting at targets is fun for her.