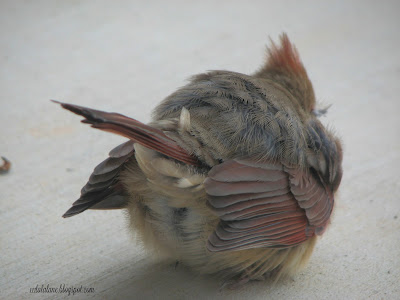 All she knew was the sky that she saw before her. And then, in the blink of an eye.....splat.
Head on, beak first, she flew straight into the glass door. She hit so hard that some of her feathers stuck to the glass. 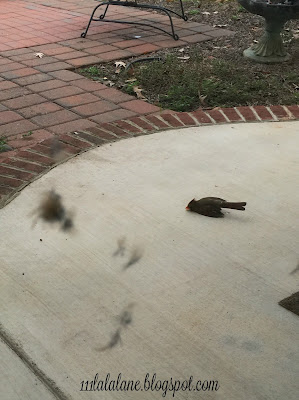 Her feathers? The dark spots on the left.


She bounced off the glass and landed onto the walkway. I felt so sorry for her.
There was nothing I could do.


She hit so hard that it knocked the poop out of her. Yeah, on the left.
I was afraid to pick her up, so I just watched.


I talked to her and told her to rest for a few minutes before trying to get up.
I told her that her false eyelashes were stunning.


And after awhile, I told her she was looking a little better and asked her to move a little.

She thought about it, ruffled her feathers and then she was gone.


I imagine she has a heck of a headache, though.