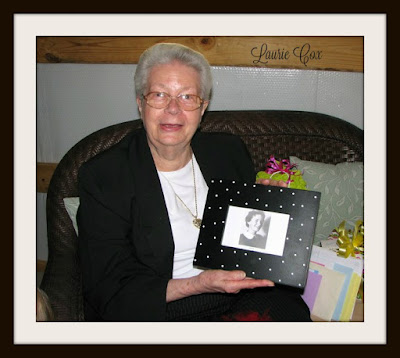 Mama is going to spend Thanksgiving with us at the lake, but if and only if I have her home by Saturday.....because she can not, she WILL NOT, miss church. And that is commendable. I'm just happy I can steal her away for a few days. Now that we don't live in Andrews anymore, my time with her is even more precious.

Today is the day of her six month check-ups with doctors. And my job is to get her to the different appointments. So, we make a day of it. We started in Andrews with her check-up there and then we drove over to Georgetown for the next. I like to take her to lunch, so between appointments we usually grab something to eat. But today, we have to go to Wal-Mart, first.

I hate Wal-Mart. I don't shop at Wal-Mart.......but, try telling that to mama. You may remember  a couple of years ago, when I lost mama in Wal-Mart.....what? You don't? Well go read that post here.

Anyway, at her last appointment today, they had to dilate her eyes and she could barely see to read the appointment card for her next appointment. So, she told the lady that she thought she and her daughter (that would be me) were in cahoots. Mama told the lady that I didn't want to go to Wal-Mart and since they dilated her eyes, she wouldn't be able to see to write a check at Wal-Mart. Bahahahaha!

Next, I asked her where she wanted to go for lunch and she said, "Well, since you don't like to go to the same place as I do, then I'll let you pick a place for lunch." After asking again, she told me that she likes Taco Bell. Hahahaha! I knew that! And she knows that I don't like Taco Bell. So we compromised and ate at another Mexican restaurant, instead.

So long story, short.....I took mama to Wal-Mart and she got her Mexican food....just not from Taco Bell. She was a happy mama, still!