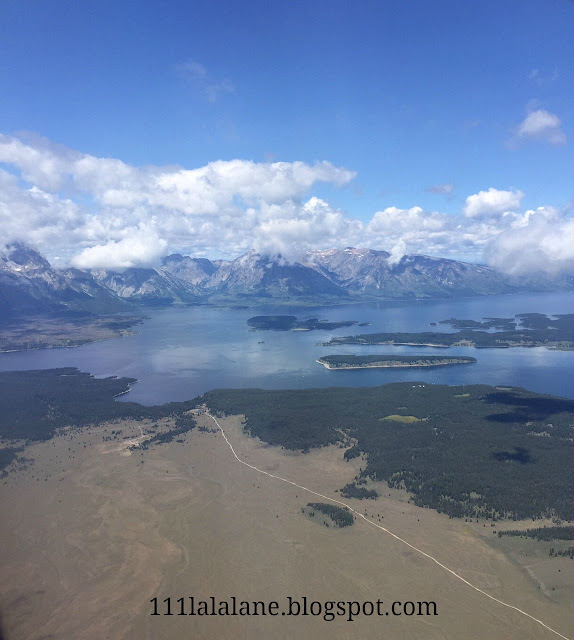 The Grand Tetons Mountain Range
...taken from the airplane while approaching Jackson, Wyoming

Well y'all, my bike tour is officially over. I made some great friends and got to see some of this gorgeous country of ours and gorgeous it is! But, the highlight, the WOW of this tour and what has me riding on cloud nine is.......I DID IT!! I rode my bike approx 153 miles in and around Driggs, Idaho through Jackson, Wyoming to the Grand Tetons National Park. I left here a rookie and returned a real cyclist! I trained for three months and not a single training ride came close to what I experienced on this tour. I can not describe to you the sense of accomplishment I feel.

The support we received from the WomanTours was excellent. Our tour guides, Laurie and Sid, went above and beyond. They made sure we were safe, provided maintenance for our bikes and fed us well. We had a nice place to stay each night, received encouragement along the way and received answers to a barrage of questions....I mean they did everything, except pedal our bikes.

Now I know y'all want to see every picture and hear every story about my week. It's a lot. So, I'm going to post in parts. You'll want to stay tuned because just when you think you've seen it all.....there will be another ride on another day and more gorgeous scenery. And we begin.....

I was scheduled to fly out of Charleston, Sunday July 19th, at 6:00 a.m. We boarded the plane and the door was closed. Before taking off, the pilot came on the speaker and said we would be delayed by 15 to 20 minutes due to a maintenance issue and asked us to sit tight. Just a few minutes later, he came on the speaker again and said that we would need to disembark and take our luggage stowed in the overhead bins with us. I didn't feel too concerned about this because I felt sure that whatever the problem, it would be resolved. We only had to wait a short time and then we were allowed to re-board. As it turned out, there was a windshield sensor issue. By the time all this happened though, we were an hour and fifteen minutes late leaving. Thank goodness I had a 3 hour layover in Dallas. The rest of the flight was fine.

While in Dallas, I sat down at my gate with some time to kill. The sun started shining in the window and it was getting hot where I was sitting so I decided to find a seat in the shade. I walked two rows over and there were at least four seats available, so I took one. The one I took just so happened to have a newspaper laying across it. I moved the newspaper over and sat down and just about that time a lady came over and grabbed the newspaper. "I'm sorry, did I take your seat?" I asked. And in a tone that sounded like she was quite perturbed she said, "No, I'll just take this one." I immediately thought to myself, "I sure hope she is not on the WomanTours with me........she sure does look cranky!" 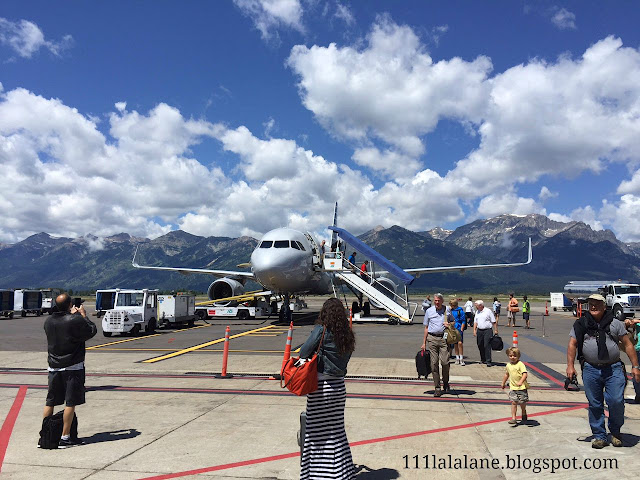 Arriving in Jackson, WY was a treat. You could see the Grand Tetons in the background and the weather was so soothing. I left 90 degrees of heat and humidity and arrived to 70 degrees of cool and zero humidity. It was wonderful! This was a small airport....as you can see from the picture we got off the plane and walked across the tarmac to get inside the terminal to retrieve our luggage. Anyone arriving by plane was to wait out front of the airport and the WomanTours van would pick us up. So, I gathered my luggage and headed out front. I waited for a few minutes and then noticed Miss Cranky standing nearby waiting, also. I thought, "I know not!" Just then I saw a bicycle pin attached to her backpack and I just knew. So I walked over to her, hoping not to get the attitude or worse.....cut!....and said, "Excuse me, I noticed your bike pin. Are you waiting for the WomanTours?" And just as nicely as possible, she said, "Yes." Boy was I relieved. A good cutting....averted! So, I told her I was waiting too and we just starting talking like nothing had ever happened. Who knows if she even had a second thought about the seat incident. It could be that I was reading a little too much into it because she turned out to be very nice. Althooouuugh, I don't think she would be one to tolerate much. Just observin' and just sayin'. And then....the WomanTours van arrived and we were off to Driggs, Idaho. I had been up since 3 a.m. and it was nearing 2 p.m. by this time. We still had many things to do that day and boy I was getting very tired. Finally, after picking up a few other ladies from a hotel in town and a designated spot for those who drove in, we were off to the condos. At 4 p.m., we had our bike fitting and then at 6 p.m. we left for dinner. I was so tired by this time, that I could barely enjoy myself. I was homesick already and really wanted to just be home. But I stuck it out and by 10 p.m., sleep came quickly.

Today's ride was described as decidedly flat. But, I was warned by Cliff that it would be hilly and have come to realize that others idea of flat is relative to where you are and what you're used to. We left Driggs on a bike path and once out of town we were on a long rural/country road. We passed hay, oats and barley fields. The first 7-8 miles were, for the most part, flat and then we started climbing slightly. We saw cows, wildflowers and barns. I saw a snake in the road, eeeek! And there was a possible moose siting by one of the girls. We stopped to investigate, but never saw it. At one point, the chain came off my bike and I had to have the seat and handlebars adjusted. For the next 4 miles or so, it looked like we were  going down hill. It was confusing, though, because we were gearing down and our pedaling was somewhat slower. This continued until we reached the 13 mile turn around. Once there, we were talking to the guides about it and they confirmed that we had been climbing. Apparently, that was called false flats. So, we got all excited because that meant the 13 or so miles back would be downhill. And they were.....and we had a ball flying down the hills. The pictures below are views from this day's ride. It is gorgeous out there. You can see for miles and on every turn, there was a different view. Back at the condos and after lunch, we had a bike workshop and a nutrition workshop. For dinner, the guides prepared our meal that night. We would be having a guest for dinner and we were excited to find out that it was the Founder of WomanTours, Gloria Smith. After dinner, we were all anxious to know how and why she started WomanTours. She had been diagnosed with breast cancer in the early nineties and after dealing with that had the urge to do something to celebrate life, so to speak. So she and six of her friends decided to ride their bikes across country. They began in Idaho, I believe, and rode to Maine. Gloria said that when they got there, she didn't want to get off the bike. And this made her think that other women should be able to have the wonderful experience that she did......thus, WomanTours was born. And I for one, am glad it was.

As you will read and see for the next few days.....this, for me, was the trip of a lifetime. It was challenging, but I never gave up. I rode up every hill....sometimes repeating OMG!, over and over, and praying for help to get to the top. And then there were the downhill times that made me squeal with delight. We rode against headwinds in the flats and dodged rain showers the closer we got to the mountains. We were warned to be watchful of stampeding bison and of bears. We could possibly see moose and other animals, too. And then there were the smells. At times, it smelled like Christmas trees. And then there were times when it was so quiet and peaceful that you felt suspended in time as you rode quietly taking in all it's splendor.  And splendor, it was!

And now, the pictures....of course, as you know, pictures don't come close to showing how beautiful things really are. I hope you enjoy them, anyway. 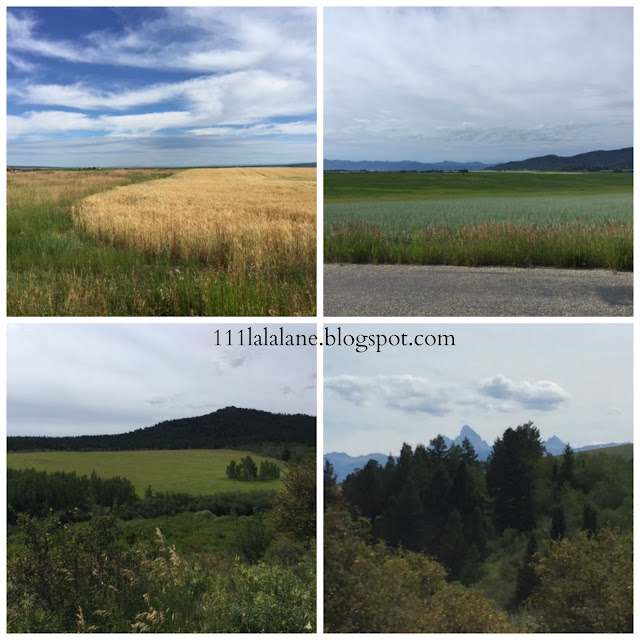 Fields of oats, barley and hay...and, views of the Tetons in the background. 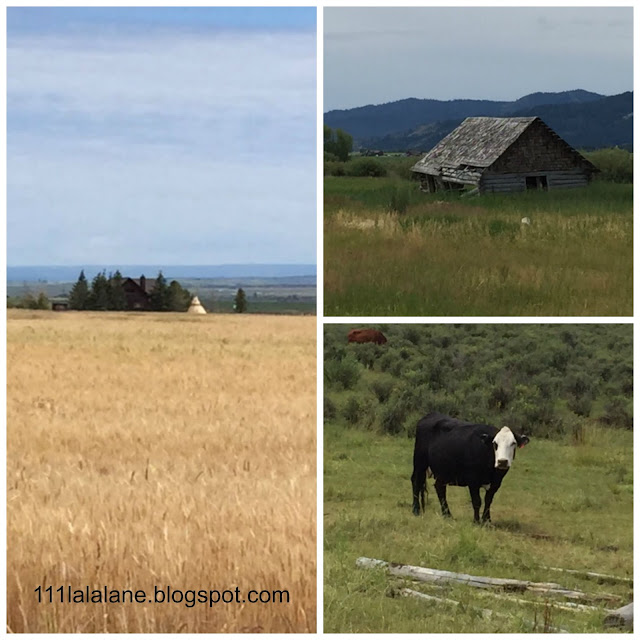 A teepee, barn and curious cow. 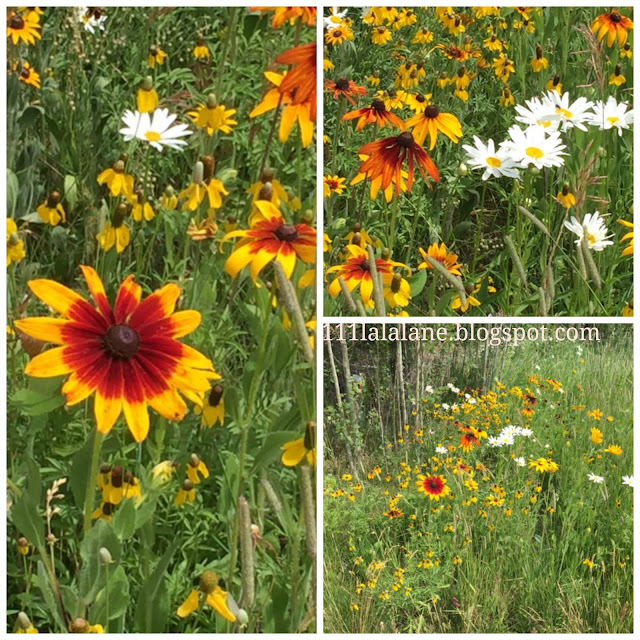 The wildflowers were gorgeous! 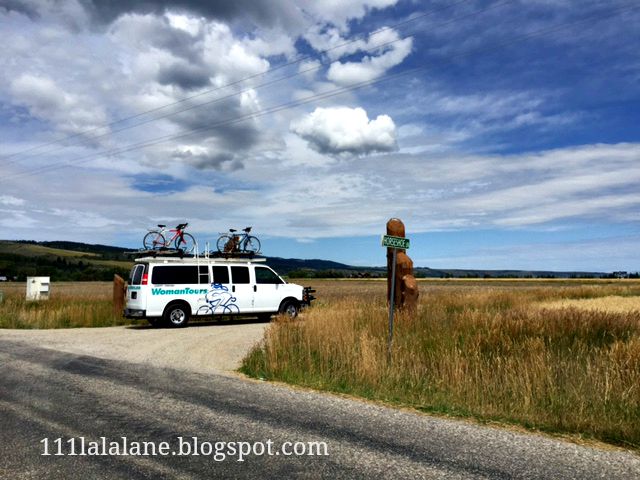 And this was our support!
Laurie and Sid was always near, ready to give a helping hand and always with a smile!

Laurie
Oh, by the way, the batteries in my camera died and these few pictures was taken with my iPhone.