Family On The Fourth 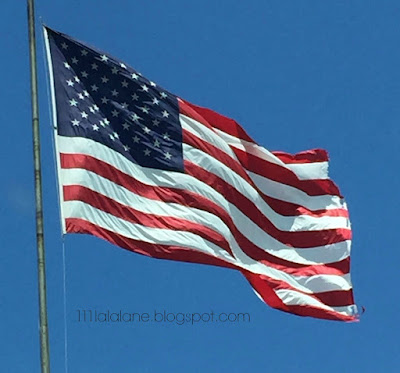 The Fourth was family time and we spent it at the lake. Cliff and I went up early and got a few chores and a little holiday decorating done before everyone starting rolling in. Emily, Matt, Lidia and Sawyer arrived on Monday and Whitney and Jason, flew in Tuesday night.


Before we get started, I just have to show you some new bloomers.... 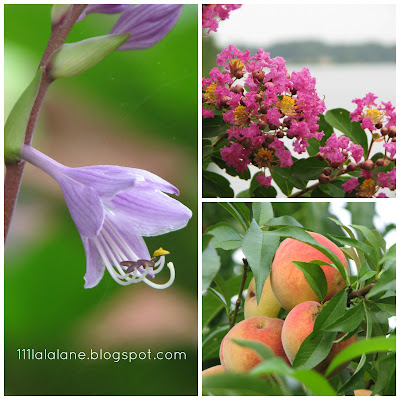 A Hosta flower, Crepe Myrtles in full bloom and our peaches. 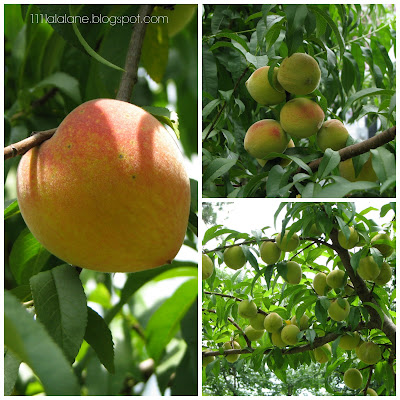 The peach tree is loaded to the gills. This is the first year of harvest for us.
I need to learn how to take care of them. Sadly, bugs or worms have discovered they are there.
However, I was able to harvest over 120 peaches before coming home. 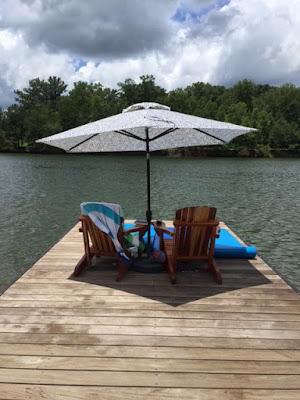 
Family-time started Wednesday. It was sunny and hot. We took advantage of it....swimming, jumping, diving and just sunning in general. We ended the day with a Low Country Boil. It was so good! 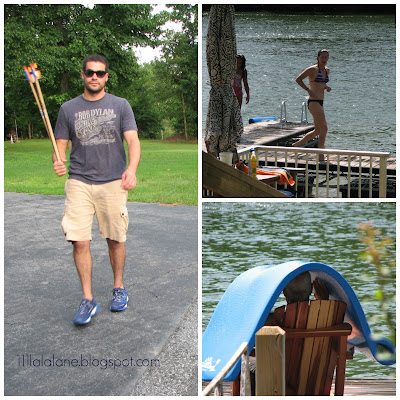 Jason, Whitney and Cliff, getting a little relief from the sun. 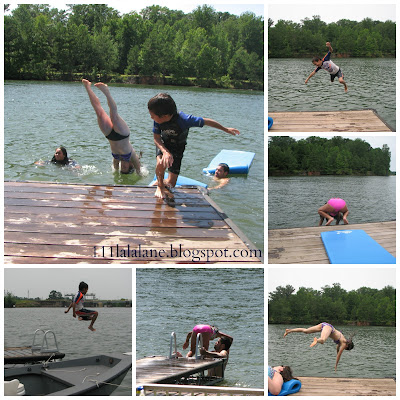 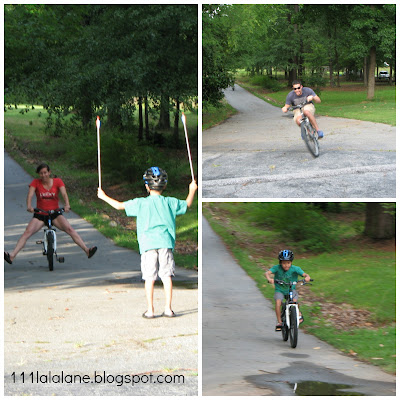 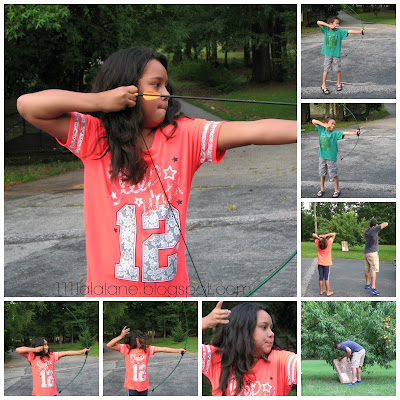 We even had shooters... 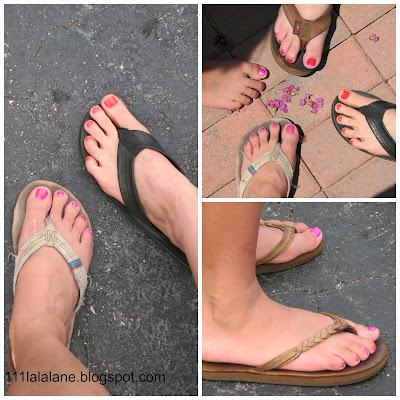 Thursday was another good day.....for exercise. I road the bike for 2 hours on the trainer and Cliff took Whitney, Jason and the kids to the little town of Ninety-Six to run and bike on an old rail trail. A little later, the girls and I had manis and pedis in Greenwood and lunch afterwards was brick-oven pizza. Yum! Cliff took the boys to his new-found burger joint. And we ended this day with a squirrel and duck pirleau. For me and Whitney, it was a little bit yuck.....but, everyone else loved it.The gang went into town to see a movie...the Jurassic Park one. I stayed home and cleaned a little. We were having friends for lunch on Friday. 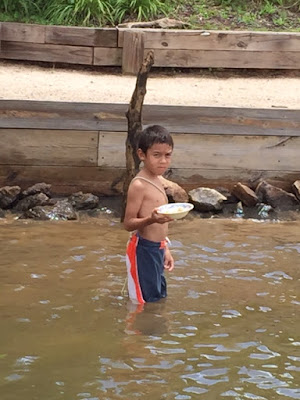 Sawyer stayed so hungry, but didn't want to miss out on any fun. So, he had his spaghetti in the lake. 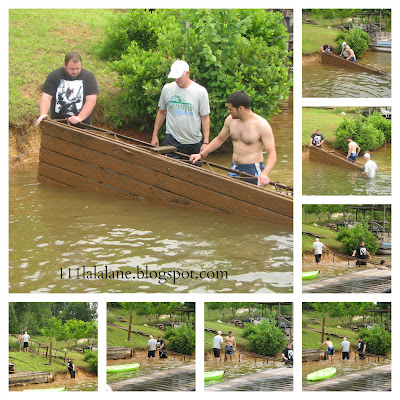 Remember the submerged dock?
Well, with so many strong men and their muscles....we had a dock raising.
It was so heavy that they had to take it apart, piece by piece.
And when it goes back together, it will be a new outdoor table.
We will enjoy many family meals on it, I'm sure.


Friday, Matt's mom and dad came over and we grilled hamburgers. It was overcast and rainy, but we celebrated like champs. I was slack in taking pictures that day.....I was just a little busy. I had everything planned as far as food went so that we wouldn't be overwhelmed trying to get lunch on the table. The menu: grilled burgers and all the fixins, grilled okra (oh my gosh, it was so good!) potato salad, baked beans, potato chips, and of course, sweet tea and lemonade. Patty and Joel brought churns to make homemade ice cream. My favorite was the Butter Finger flavor...they also made Orange Crush. After lunch, we spent some time on the dock until it started raining, again. It was so cool that we were all covering up with towels to stay warm. From then on...we hung out on the screened porch. Emily and Matt had to leave that evening. They both had to work the weekend. They were missed! At least, we were able to have Lidia and Sawyer stay with us.

Saturday, I was pretty much exhausted and we just hung out in various places. I had a good old nap on the chaise lounge down by the water and I'm pretty sure Cliff took one in the hammock. The kids donned their wetsuits that day. It was still a little cool. Cliff and the kids picked up some fireworks earlier and Sawyer could not wait until dark so they could shoot them. We also saw fireworks that others were shooting around the lake. It was an early-to-bed night because Whitney and Jason had an early flight back to Colorado. 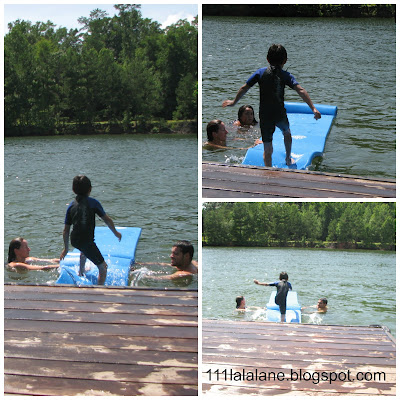 Since it was a little cool, Lidia and Sawyer wore the wetsuits to swim. Look we even had a float walker. 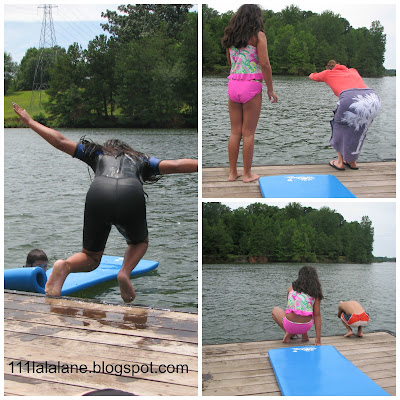 And a lesson in diving was what Lidia got. She tried on her own and then had help from
Whitney and Sawyer. Bless it! She can swim like a fish....actually, she swam across the lake and down to the neighbors dock a couple of times with Cliff. But diving is not her forte, YET.

Just so you know....I hate goodbyes!

Sunday, I cried. Cliff took Whitney and Jason to the airport for an early flight back to Colorado. We probably won't get to see them again until Christmas and that makes me so sad. I let Lidia and Sawyer sleep in while I road the bike on the trainer, again...for 4 hours.

I enjoyed this week with the kids so much. It is rare anymore for all of us to be together and I cherish the times we are. 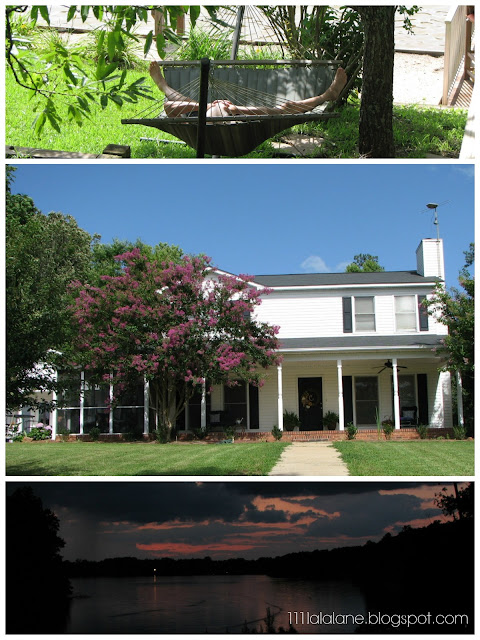 And then, it was time to say Goodnight!

Whelp, hope I didn't bore you....I'm sure you are exhausted. Go ahead take a break. I'll be back in a couple of days with my bike training stats. Law! My leg muscles are as hard as brickbats. Training tells on you.


Hope you all had a wonderful fourth,