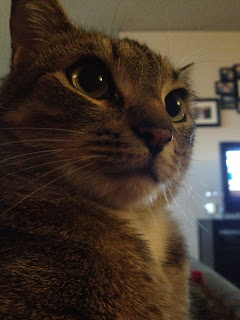 Kitter﻿
Well, not much happening on the home front. Summer usually slows down for us, considerably. Too hot and humid most of the time to do much. Know what I mean? I have definitely been exercising a lot. I'll do a month end exercise stats post in a couple days. I know you can't wait to read that one.....I've been astonishing myself. Ha!
The latest: Whitney came home for ten days and then her husband, Jason, surprised us by flying in three days later. ﻿We had a great time, just hanging out. I was hoping we would be able to get a run in together, but she twisted her ankle at a mud run the week before so she was recouping from that. We actually spent all of our time at the beach. Whitney has been missing the sand, the sun and the sea. I took pictures and was duly threatened, if I posted any of them. Although, she looks great. She's been doing Shaun T's Insanity workout and has lost a few inches. If she loses anymore, she's going to dry up and blow away. But you know how it is with us girls....if said photos don't make us look drop dead gorgeous, then you better burn them. Ha!
Anyway, Kitter was left home with a sitter. She didn't like it. Whitney reports that Kitter paced the floors until her return. So, I thought it was time for another Kitter post. Maybe that will make up for Kitter's duress of being left alone for 10 days. So here, in no particular order, are the latest Kitter shenanigans. 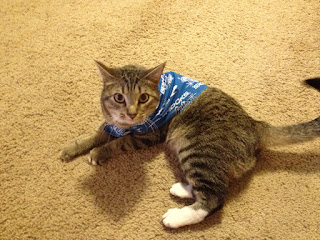 Whitney: She's not happy with me.
Me: I reckon not. 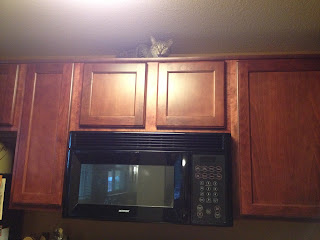 Whitney: Your grand-kitty needs to be punished for this crap. 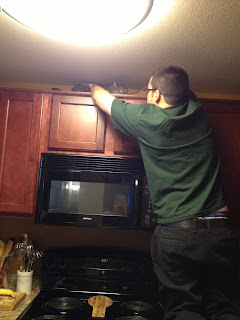 Jason rescuing Kitter.
Whitney: She gets on the counter (cringe). Then walks across the stove (double cringe). Jumps on top of the refrigerator and then jumps on top of the cabinets. She is in timeout. Solitary confinement is the worst punishment for her. 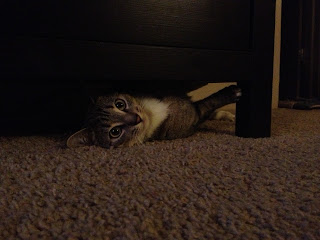 Two seconds later, she almost ripped up the carpet....tearing out of there because the voices in her head told her to. 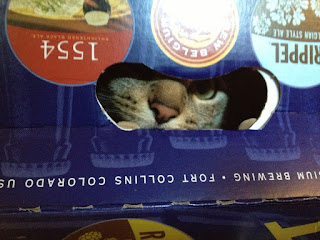 Whitney: Ripple Kitter.
Now, this is quality Kitter blog material right here. LOL!
Whitney via text message:   I have some great Kitter blog material including her tornado shelter and meeting her cat cousin, Zara.  We took Kitter to meet Jason's cousin Tim's cat, Zara. That didn't go well. On the way there, Kitter crapped and peed in her tornado shelter a.k.a. cat carrier. Car trips stress her out. So, for the first time ever,  we had to bathe her at Tim's apartment. Tim's cat kept hissing and growling, so then Kitter started. Eventually, Kitter backed herself up behind the toilet and stayed there because she was scared of Zara. Needless to say, Kitter and her cat cousin, Zara, don't get along. And now, Kitter needs a new tornado shelter. 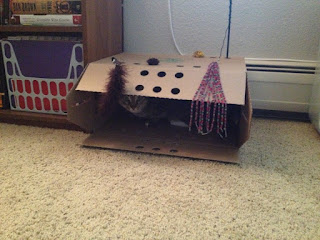 Kitter's new playhouse. It has disco balls hanging from the ceiling. 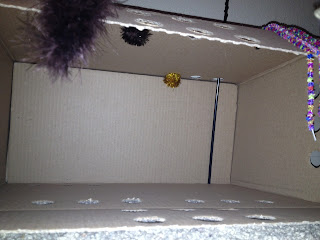 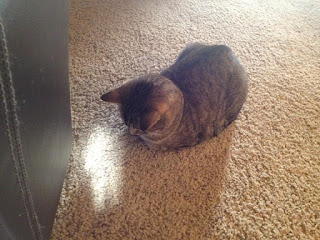 Whitney: The lights drive her bat crap crazy.
Love me some Kitter.
Be back soon,
Laurie