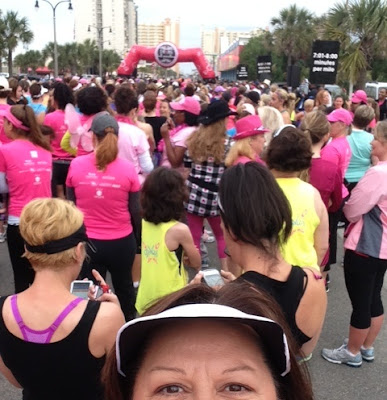 Warning: There will be some talk of nerves.
Disclaimer: Cliff is not the best picture taker, but he is a great husband!
Nuff said!﻿

I have never run with so many people in my life! It was a sea of Divas lined up as far as the eye could see. Normally, this big of a crowd would scare me off from running, but this was the Diva's run. I had to! Even though as soon as my feet hit the floor Sunday morning, the dang nerves showed up. I'll not talk too much about the nerves today, other than to say 3 times.....really?

Cliff was such a big help. He rolled me out of bed and headed me in the right direction towards the shower. He even fixed breakfast for me. Toast and P-Nut Butter. I could only choke down one piece. I had no time for coffee, just a couple of sips of water. But never fear, Cliff had a bottle of his special triathlon-ironman concoction for me to drink. He said, "It even has some caffeine in it". Oh Yay!

I could have easily talked my way out of this one, but I pushed through and I am so glad I did. This Diva's race was jam up. There were over 5000 runners between the half-marathon and 5K. As you can imagine, parking would be tricky. Parking is the only thing that makes Cliff nervous. Lawd, to be so lucky. So, his way of dealing with his nerves is to get up before the crack of dawn in order to arrive early enough that we can get good parking. And we did....right beside a very nice bathroom in McLean Park. Yes! Because I definitely needed it! Third time's the charm, so they say. 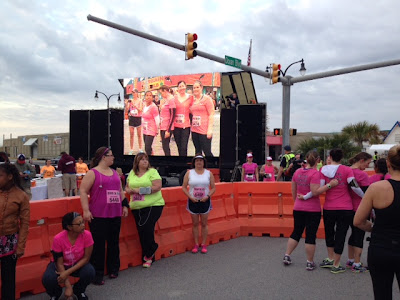 That's me in the center below the big screen.

After reigning in the nerves, with a half-hour to spare, we made our way to the start line. As we rounded the corner, we could see shades of pink and black everywhere. They were the Diva's signature colors. There was a huge video screen at the start. As you passed by, you could see yourself on the big screen....so cool! Over 3000 half-marathoners were lined up and ready to go. Oh the anticipation! I could hardly take it all in. So much to see. Oh look, there are the porta potties. Must have been a dozen and lines for them were backed up 20 or more deep. I better get in line, just in case. I'm so sorry y'all have to endure this, but a million years from now I want my grandchildren to know everything I experienced, if you don't mind. Anyway, made it out in time to see the half-marathoners take off. 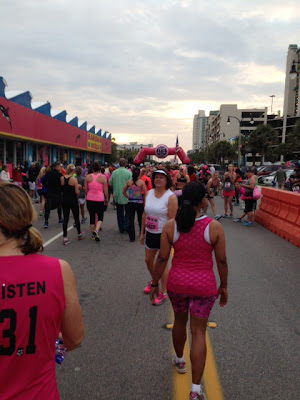 Me in the sea of Divas.

And then it was our time. The 5K'ers. There were 1112 of us to be exact. The nerves now gone, I was ready! Cliff was going to ghost run with me. I was happy about that for 2 reasons....1)moral support and 2)he could pace me. He runs so much faster than me, this was going to be a piece of cake for him. The horn blared and we were off....walking....what? There were so many people that it took us nearly a minute to make it to the start line and then another couple of minutes before the sea of Divas spread out enough that I could actually start running.

Now running, I was in the zone. I had concentration written all over my face. Weaving in and out of runners, I was passing some of them. Now, don't get me wrong, I was getting passed by some, too. But oh, what a feeling! I was definitely pumped! My adrenaline was in overdrive. We made it to the one-mile mark, before I knew it. Cliff was giving me updates on my pace. He was encouraging me to keep it up. Shortly, we merged for just a little while with the half-marathoners. I was keeping pace with some of them. It got me to thinking about next year. "I will be back next year for the Diva's half-marathon", I said to myself.

I knew a water station was coming up at the two mile mark so I pulled out my little bite-sized Snicker that I had concealed in the tiny little pocket of my running shorts. I was hoping the thing had not melted....that would have been a mess. How could I explain that the stain was a Snickers Bar? Hallelujah, it had not melted.....Snicker's stain explanation averted! Anyway, I ate the Snicker Bar slowly (so as not to choke) to Cliff's question of, "You're eating"? LOL!! He never knows what to expect with me. I ignored his comment! I saw the water station and got in line. Wow, I needed that! 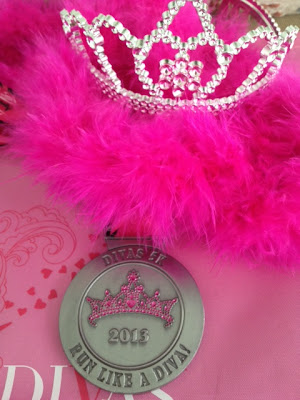 Cliff looked at me after the tiny Snickers and water break and said, "Your time has improved"! Great! That made me run even faster. I don't know how far, but down the road a little further was another water station. Some lady bust right up in front of me.....nearly made me spill my Gatoraid. I thanked her and then it was back to business.  Just before the finish, the Divas organization had a table set up on the route for you to grab a pink feather boa and a tiara. They know how to spoil a Diva. 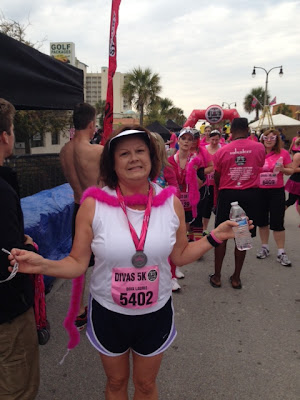 Oh Lord, that's a cheesy grin!
At the finish line. See the shirtless fireman behind me?

Rounding the final corner, I looked up and there I was on the big screen. I waved to myself. Ha!  I kicked it up a gear and crossed the finish line. What an awesome race! Making my way through the corral they had set up, I saw half naked men giving out our medals. I totally ignored Cliff and got in the cutest guys line. My first medal ever and it was placed around my neck by a half naked fireman! Now, don't you want to go out and sign up for next year's race? Go ahead, you know you do. Next in line, we received a rose and then a glass of champagne. I have never! I am a full-fledged Diva now. And I have pictures to prove it! 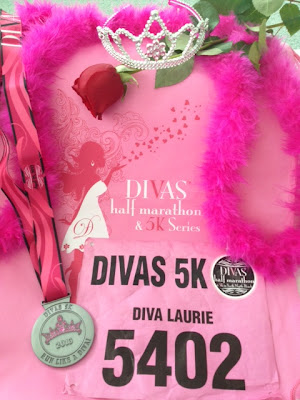 Before getting to the race, I told Cliff that no matter what I said, do not let me go out and sign up for another race. My nerves just can't handle it.

I no longer crossed the finish line and received all my goodies than did my inner voice start asking, "OK, where's the next race"? Some Divas never learn! 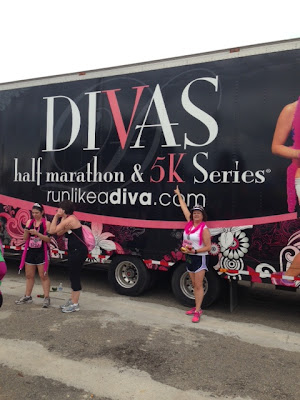 If you are interested in running a Diva's race near you and I highly recommend it, check out their website (here). 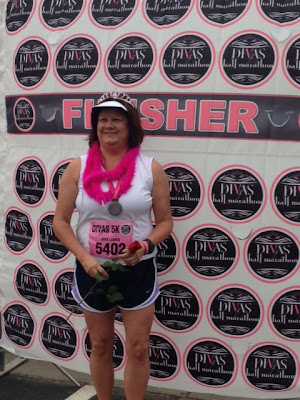 And in case you were wondering, my stats for the Run Like A Diva 5K are: