A couple of weeks ago, Sawyer's class went on a field trip to the Waccatee Zoo. I was invited along and since it was only 5 or 6 miles from us here at the beach, Sawyer just spent the night with us and we met his class there the next morning. Well, once the children starting getting off the school bus, I saw that they all had on green t-shirts. The teacher wanted them to all have matching identifiable colors.

I didn't get that memo.

And if you know me, then you know that I needed to get that memo! I was nearly like OMG, all the school children match but Sawyer! I felt heat begin to rise....and for a split second I thought, NOT now - NOT the hot flashes, NOT the mood!
But not to fear, Sawyer's teacher ran back to the bus and came back with Sawyer's identifiable green t-shirt. So now, we just had to disrobe him right there in the parking lot. The shirts must have been one size fits all, because his was so big that it hung down below his jacket. Oh well, at least it gave him another layer of warmth. And at least now he matched the other children.

I had to tell you the back story because heaven forbid you thought I dressed him like that on purpose. I mean, especially after the near OMG incident of him not matching his classmates.

Alright, I've calmed back down.

Sawyer informed me that the entrance of the zoo is through the gift shop. So I said, "OK, that's fine. We can take a peak at the goodies before we go see the animals." Sawyer said, "but LaLa, there are snakes in there. Real ones."  OMG!  My sweet baby grandboy knows how deathly afraid of snakes his LaLa is. And, bless it, he was trying to warn me ahead of time.

But for the sake of a class full of 6-year-olds, I decided it wasn't the time to squeal like a girl and start chanting...I am not going in there, I AM NOT going in there! No....I sucked it up and walked through as fast as I could, pulling Sawyer behind me. Thank God, that part's over.

I just shuttered thinking about it.

The rest of the day was pretty benign. Thankfully, the exit was at a different place than the entrance or I might've had to crawl the fence. Anyway, the rest of the story......

The Waccatee Zoo is small, but it has a passel of Peacocks. 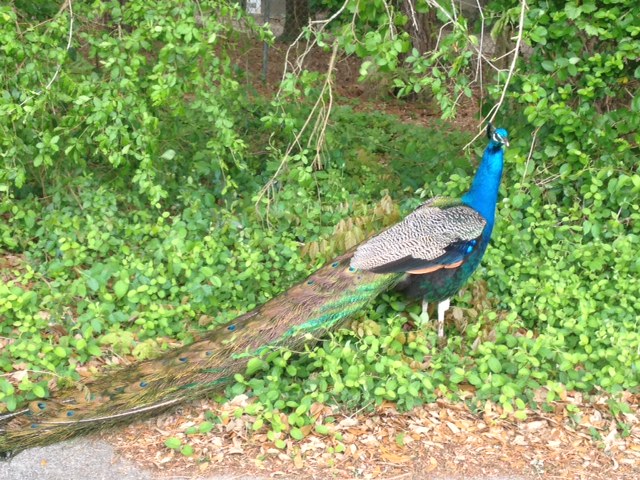 This one was trying to blend in with the weeds.

Sawyer was enamored with them. 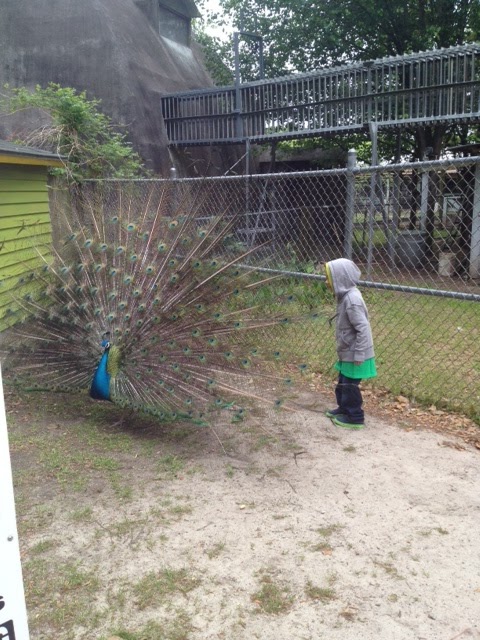 He tried to get as close as possible. 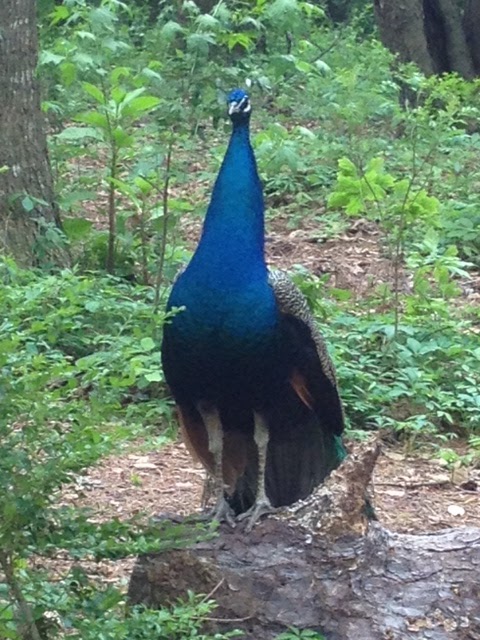 We saw this one standing on a stump. 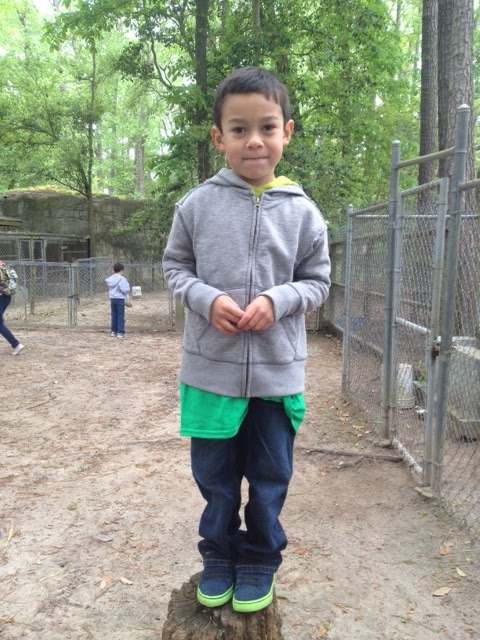 So, Sawyer had to stand on a stump, too! 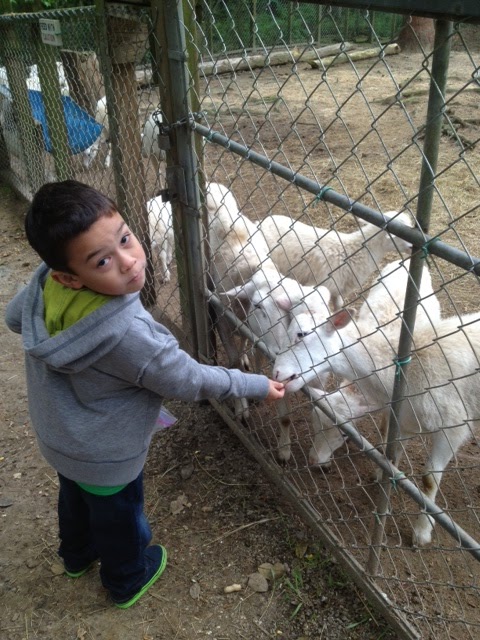 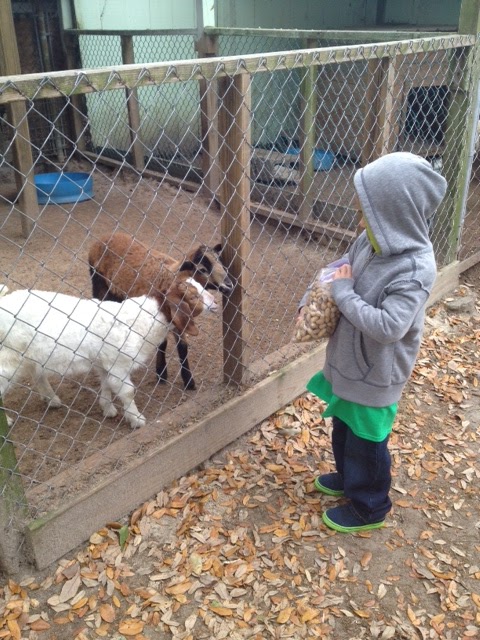 And so do goats. 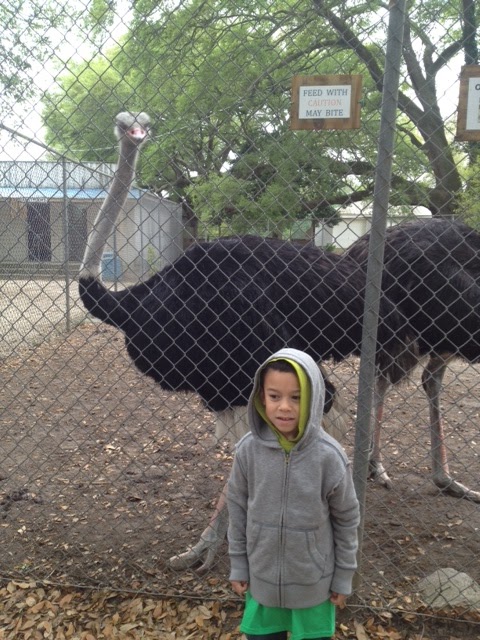 The ostrich wasn't interested in the peanuts. Looks like he was ready to disrobe Sawyer right there in the zoo. Probably thought that long green thing hanging from under his jacket was some kind of foliage. Or he may have thought Sawyer was a giant grasshopper. We'll never know.  Moving on.... 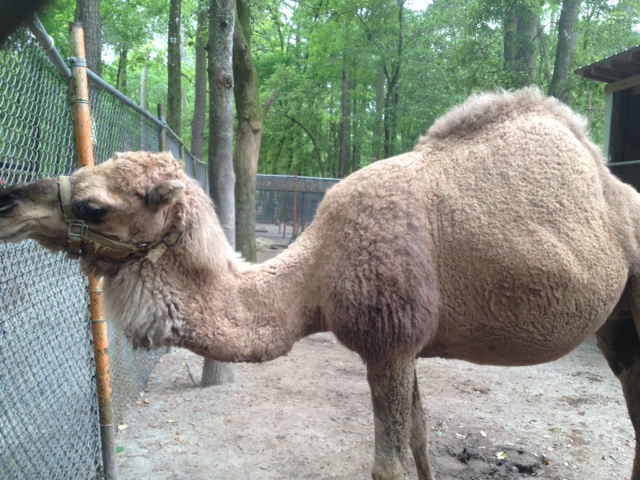 There was a camel. And he was trying to stick his lips between the fence. 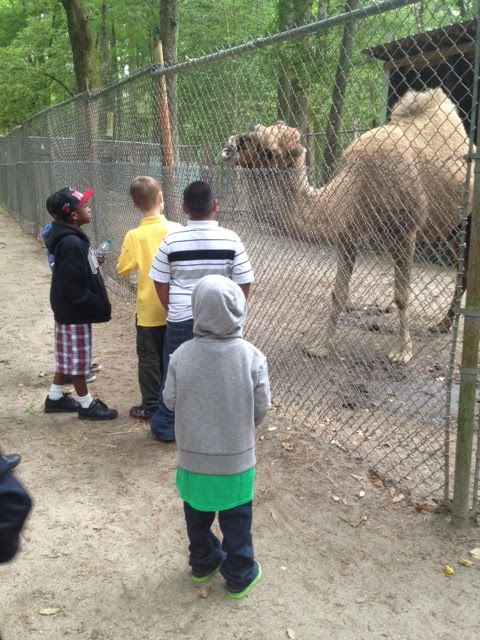 See his pursed lips? Ha! Sawyer wouldn't get any closer because he thought it was a llama and was afraid it would spit on him.  I secretly wished I had a water gun.  ;) 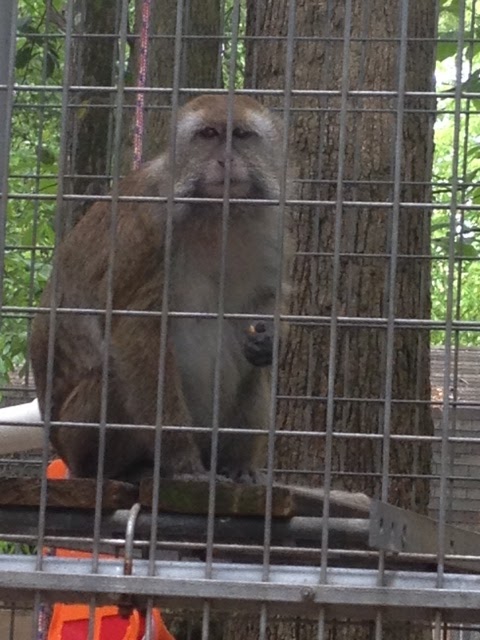 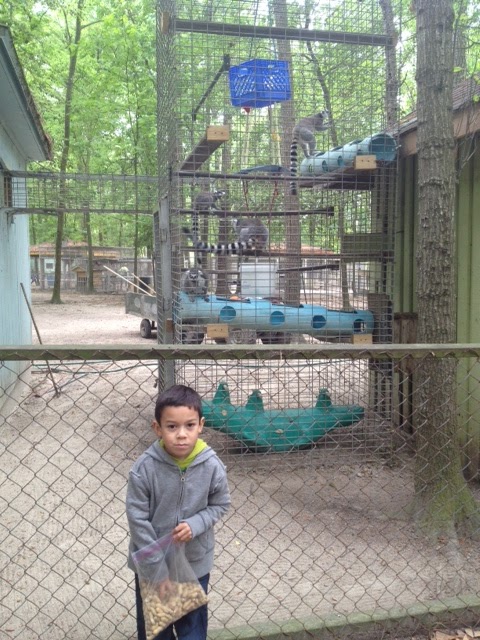 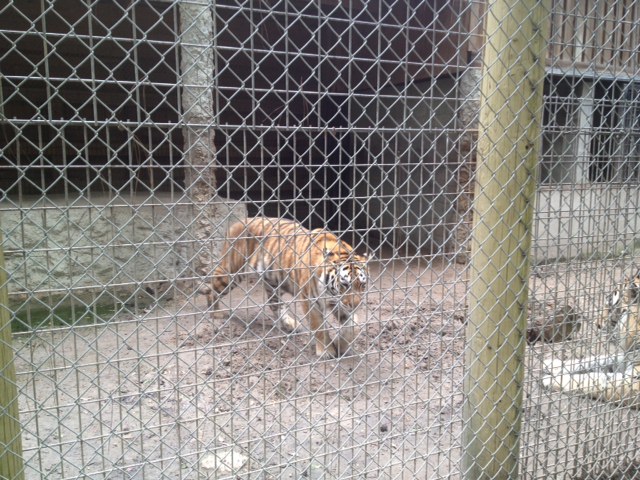 Even this gorgeous tiger. 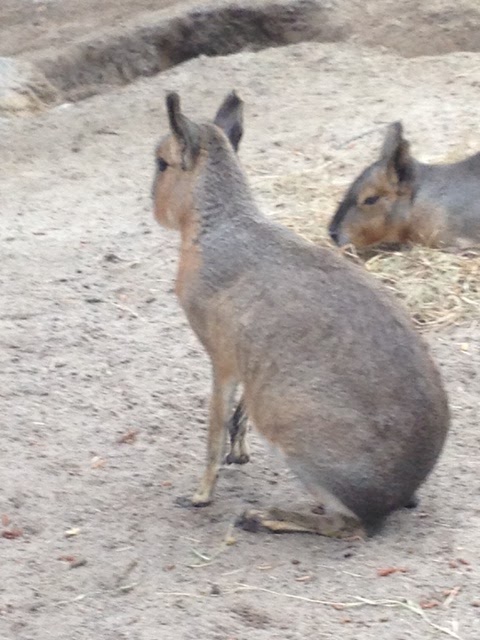 And this thing? Sawyer thought it was a Jack Rabbit. I have no clue! 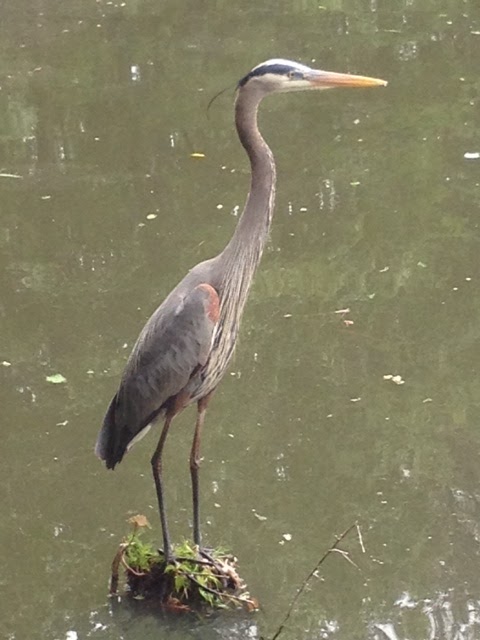 We saw a Blue Heron. 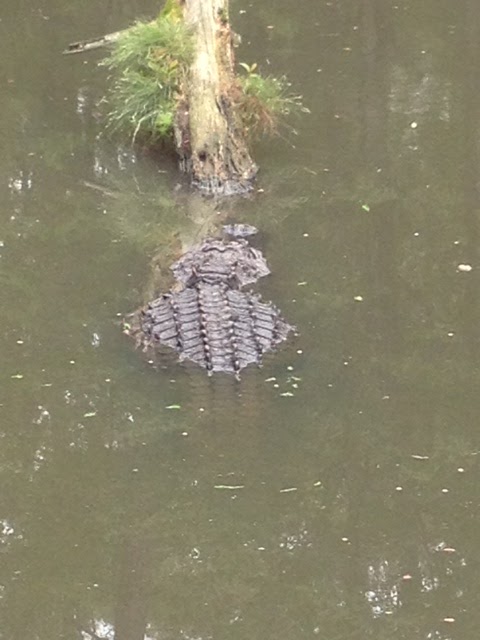 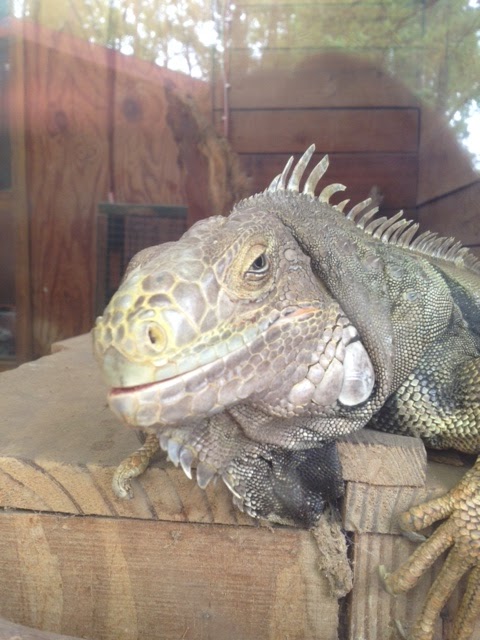 But the highlight of my day....this lizard posing and smiling for the camera. He needs a pedicure or manicure....who can tell?

After visiting the animals, the class had a picnic lunch of sandwiches and chips. The field trip was over, but Sawyer and I were not finished with our day. We headed back to our place at the beach. I needed to plant geraniums and Sawyer wanted to ride his bike. 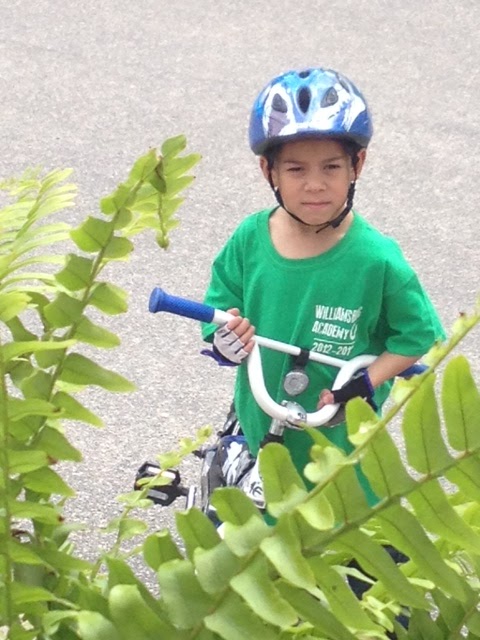 He wants to be a cyclist like his Papi one day. 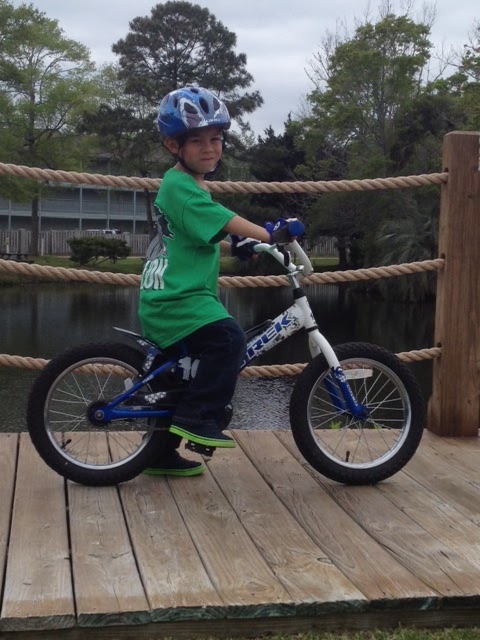 And I would say that he is well on his way.
In addition to riding on the road, he likes to ride in the dirt and grass because he says it gives him more room to ride. After riding back and forth, round and round and feeling all confident and proud of himself,  he pulled up to me and declared, "LaLa, all I need now is a ramp or a bridge." Ha! So the bridge it was. He was out to conquer something! 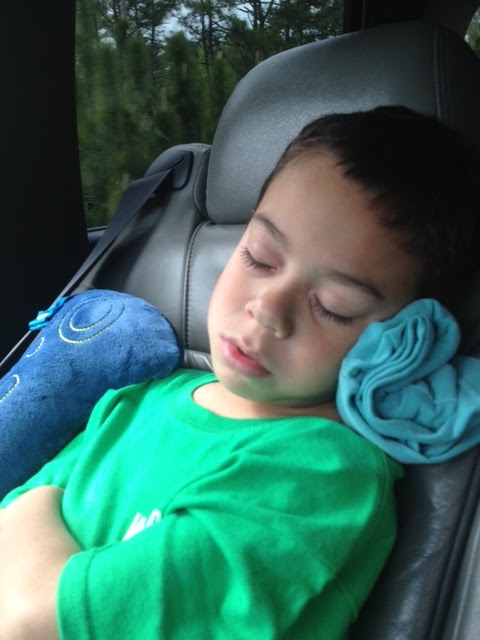 What a day full, for a 6-year-old. We finally had to leave the beach and head back home. Bless it! He was tuckered out and fast asleep by the time we reached the first red light.
Look at those beautiful lashes. Isn't he just the cutest thing you ever saw? I love him! and I wouldn't have missed the field trip with Sawyer, for anything in the world.