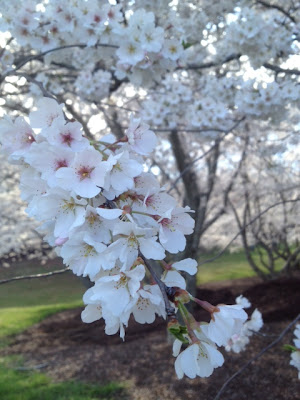 The plan was simple. Cliff and I were going to Lake Lure for a bike ride and a swim. Never mind that Lake Lure is mountainous and the water is frigidly cold. I must have been in denial because who in their right mind would attempt to ride 22 miles in the hills of Lake Lure. But, that was the plan indeed. Cliff's plan. And you see, Cliff makes some mighty lofty plans at times. 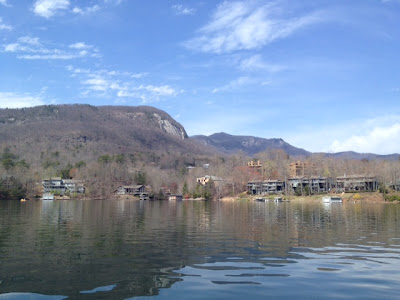 Here's the story. Cliff and I left Thursday for the beautiful Lake Lure. He had a scheduled 63-mile bike ride that Saturday through the mountains of Chimney Rock, Lake Lure and surrounding areas. For beginners (that would be me), there was a fun ride of just 22 miles. And then on Sunday, he would swim 4 miles in Lake Lure as a training swim for a 5-miler he has coming up in June. So, he thought it would be a great idea to make it an all exercise weekend.

The only thing is, last Wednesday, I started feeling sick with some sinus issues. The pollen this year has been a doozy. So, I started taking sinus meds to help. I wanted to have a good weekend. It did sound fun. 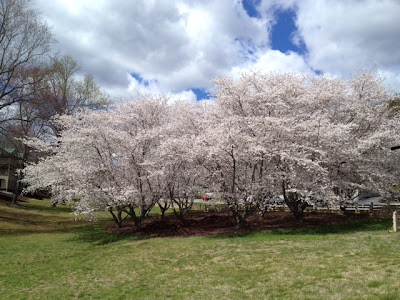 Some of the gorgeous Cherry trees blooming at the resort.

Thursday: After arriving to Lake Lure, we hit the gym. I rode the stationary bike for 11 miles. Pretty impressive, considering I don't ride the bike anymore. But you remember, that is one of my goals for the year....so I jumped on with excitement and vigor. We were going for a swim in the indoor pool afterwards, but the place was crawling with kids.

Friday: I was definitely sick. I had a temperature, was coughing and had a stuffy nose. I continued with the meds...not letting it stop me from the exercise weekend Cliff had planned. We rode bikes today for about a mile. That's all I could handle. We even rode up a 15% grade hill, twice. I know it was 15% because Cliff has a Garmin or some dohicky that said so. But even if he didn't, look at it. That's steep y'all! That road has fear written all over it. 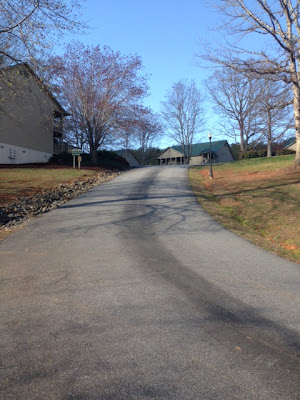 Said 15% grade hill. Yeah, you see! It's steep. That's why I look so contorted in the next picture. 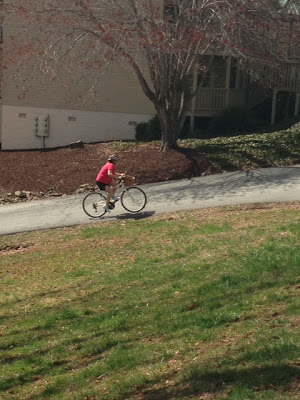 That hill was a killer. It took all I had to make it to the top. I was grunting the whole way. And then Cliff had the audacity to ask me to do again. So, I did and it wasn't any easier the second time. Grunt!

﻿Later that afternoon, we ran 2.16 miles....and you guessed it, more hills. And then when we got back to the previous 15% grade hill at the resort, I ran up it too.  Occasionally, there were some flat places to run. Artificial, but flat. Ha! 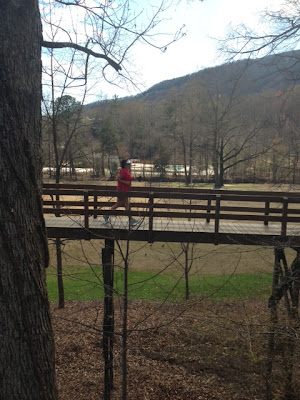 Now this is more like it. Artificial flatness! That's me running, flat. I love to run on board walks. The surface is so forgiving. 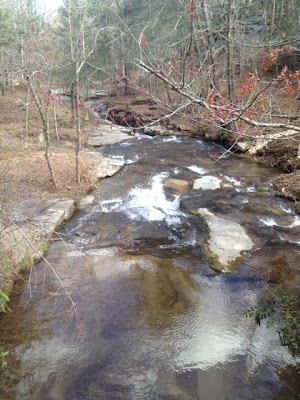 And this is a creek view along our running path. Serene! 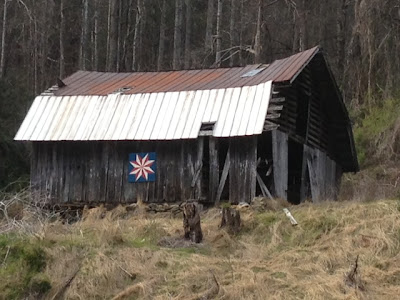 Some of the local sights.....Quilt block on an old barn in Chimney Rock. 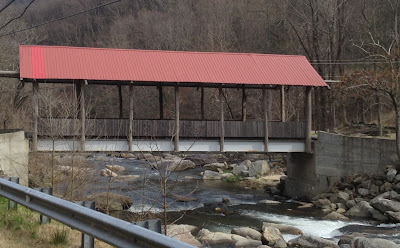 Saturday:  Still sick. I decided that there was no way I could ride 22 miles in those hills. I'm pretty sure Cliff was a little bummed that he didn't get to, but there was just no way. So, we went on a 1 mile hike instead and yes, you guessed it straight up the side of a mountain.  Hmmmm, Cliff was now starting to cough a little. 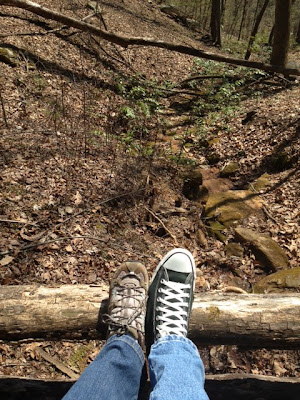 Our hiking shoes. On the left....the ones I scored in Colorado and on the right....Cliff's Converses...he never leaves home without them. 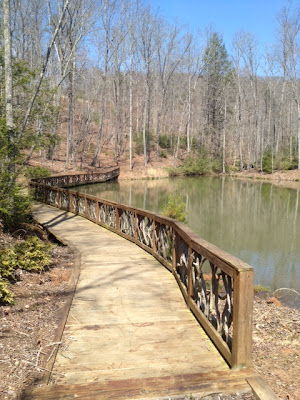 Bridge at the trail head. 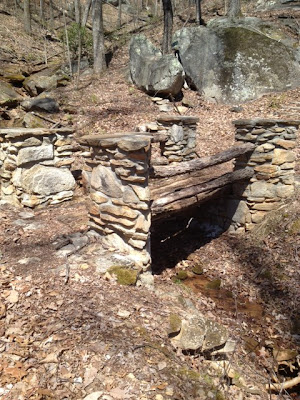 Pretty stone bridge about half way up. 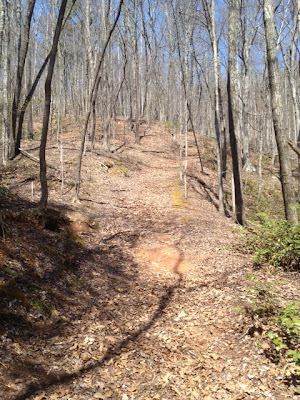 Yep, it was a climb alright. 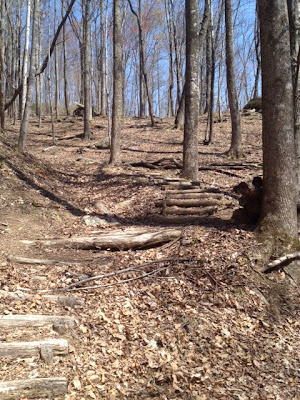 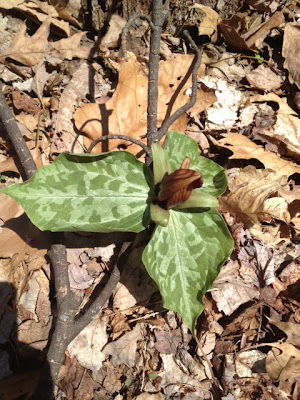 Saw this unusual plant. Does anyone know what it is? 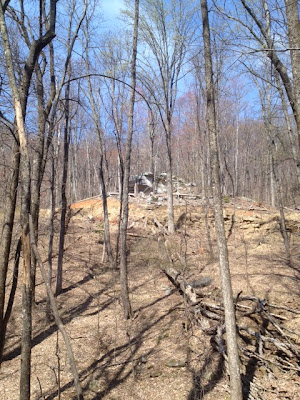 Sunday:  I was starting to feel a little better, but now Cliff was feeling bad and had fever. He decided the lake was way too cold to go for that swim, especially since he was now getting sick. The water temperature was 58 degrees F. He had a wet suit, but his face would be exposed. I think he made the right decision.  So, we kayaked instead for 1.8 miles (which took a couple of hours) and then called it a day. 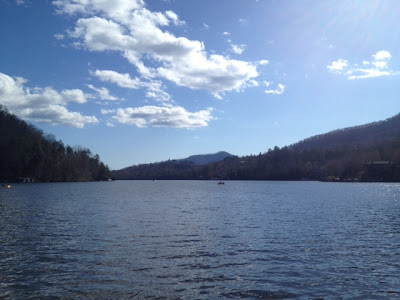 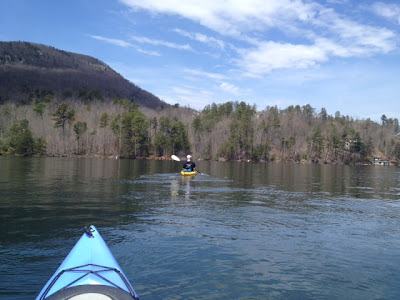 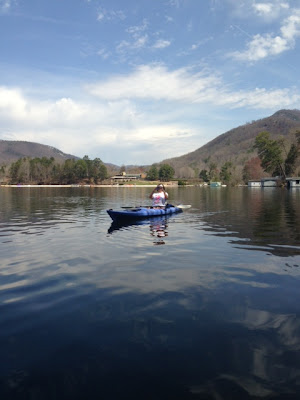 That's me taking a picture of Cliff.

By Monday: Cliff was really sick. So, we packed up and came on home. I feel good about all the exercise we got to do. Of course, it would have been more fun and intense even, if we hadn't been sick. We kept going as long as we could. I took lots of pictures. Overall, it was a great weekend for us to get away and spend some quality time together. Cliff ended up going to the doctor today. He has pneumonia. He will be fine and we'll have another exercise marathon weekend, another time. 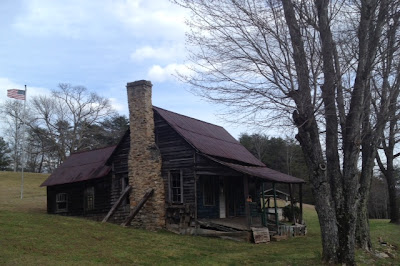 Just an old mountain home. Bless it! Seems as if she's seen better days. She's still beautiful though and was begging me to take her picture.....as if to say, "I am kind, I am strong, I am important".

Oh wait before you go.....you might want to check back in a couple of days. Sawyer's been on the loose.

***4-11-2013 Update: The doctor's office called this morning to say that Cliff does not have pneumonia after all. He probably has the flu and an URI. He's feeling better. Thanks for your concern.