We moved into our home in February of 1997. And I must confess that not a lot has changed since. We did a kitchen remodel in 2010, painted a few rooms, but that's about it. The window in our bedroom had a nice wooden shade when we moved in and I didn't feel the need to change it. So for the past 15 years, our bedroom has had no curtains. Cliff thinks that has been the greatest travesty. 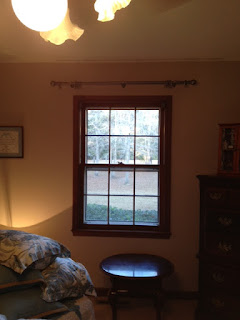 So......ready for a change anyway, I bought some new curtains. If you were on Facebook today, you may have seen one of my posts about the tissue that fell from the curtain while I was ironing it. Go take a look. It was gross. And then all I could think was....what little Chinese person blew their nose in that. I am sure that's how the Swine flu spreads. Upon closer inspection (because I had to pick it up and throw it away), I noticed that it wasn't a tissue at all, but a leftover piece of interfacing from the embroidery. Ha! Swine flu and panic averted!

Oh, wait! It gets better...then I saw what looked like a stain and spent 10 minutes with a Tide pen and some vinegar trying to get it out, but that turned out to be a piece of thread stuck between the lining and the curtain. LOL! Maybe what I need is a new pair of glasses. 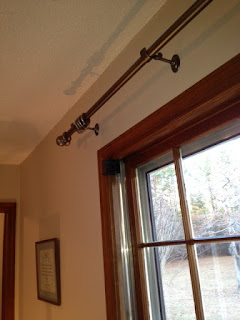 So up goes the curtain rod. That wasn't so hard. Now it was time to hang the curtain and I realized I didn't order enough curtain rings. Dang! Made a mental note to order more from PB, TONIGHT....before I lose momentum. 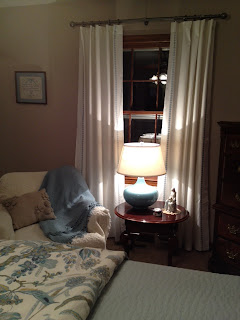 What the heck....I decided to hang them anyway and double up on the hooks that go into the curtain rings. It doesn't look the greatest, but it will do until the new rings arrive.

This little project took me all live long day.

It goes much faster on HGTV.

I think their shows are rigged.