The Incident on I-20

This is a long story, but I have got to tell y'all what happened to me today.

I was driving down I-20, heading for the beach, when I noticed about 6 patrol cars on the side of the road. A couple were highway patrolmen and a couple or more were unmarked cars and a couple of those had their blue lights on.

I wondered what in the world was going on....did they find someone in the ditch? I decided that wasn't it or there would have been an ambulance. Then I wondered if they were after an escaped convict. He may be hiding out and the patrolmen are getting ready to sweep the area. Well of course, I began to help them look. I was making note of any outbuildings nearby that the convict could be hiding in and there were a couple. But I didn't see any signs of a break-in.....so, I left it to the patrolmen.

Two miles down the road I saw my exit coming up. I turned on my blinker and pulled over in what I thought was a turning lane. Turned out it was a wide shoulder area. HaHa! I stayed on the shoulder until I reached the exit, which was only a few more feet away. Just then.....

I saw the PoPo in my rear view mirror.

One of those patrolmen had pulled in behind me. It startled me. I wondered if he had new information from what I perceived to be a posse getting ready to search for an escaped convict.

Apparently not. He didn't seem to be in a hurry.

Strange thing was that he followed close behind me. I took the exit and kept within the 45 mph speed limit, until I saw the 60 mph speed limit sign. With the patrolman still following closely behind, I decided I would wait until I actually passed the sign before speeding up. We had traveled at least a quarter of a mile at this point. I was doing everything right....staying within the speed limit, had on my seat belt, used my blinkers, so I had nothing to worry about.

Well...... just as I began accelerating up to 60 mph, the highway patrolman turned on the blue lights. The C-word came out of my mouth before I knew what happened. What in the world was I doing wrong? The only thing I could think of was that I had pulled onto the shoulder thinking it was part of the exit lane and he probably thought I was drunk or on drugs.

I pulled over and just as I did, I saw my camera tripod lying on the front seat. "OMG, what if he thinks it's a gun? What am I going to do?"  I had no time to do anything....he was at my window before I could hide it. He greeted me with, "Good day, ma'am." Well it may or may not be....depends on what you want... and NO that's not a gun...was going through my head.

I looked and exclaimed, "Oh My Lord!"

My license plate had expired!

All of a sudden I wondered, "Can he take me to jail for this?" And then I wondered what I was going to say to keep from going to jail. I couldn't come up with a thing. I was surely bound for the pokey.

He took my license and headed to his car. About this time I decided I might need to take a picture of this and send to Cliff, just in case he had to come bail me out. The patrolman came back with my license and registration and told me that I needed to get this taken care of. I told him that I would and that Cliff probably had my new one in his Jeep. He said, "No ma'am. The DMV said it has not been renewed. I'm going to just give you a warning, but go take care of this." I assured him I would. 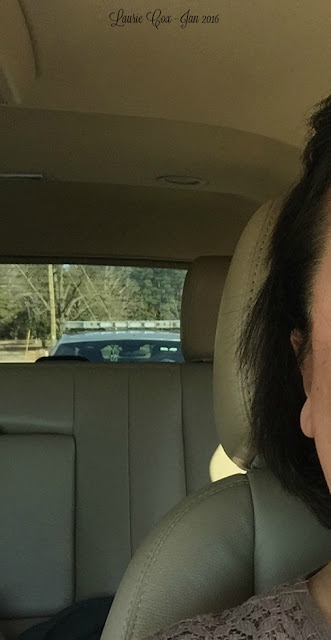 Oh y'all, I had just dodged the long arm of the law.

If I had my wits about me, I would have asked why all those patrol cars were pulled over on the side of the road. I figured it was best to let it be.

I still can't figure out how he saw those tiny little numbers on my license plate, as I drove by.


Before leaving, I took just a minute to send the photo to Cliff.
He didn't respond. Ha!

What happened next may be TMI, at least for the men who read this. I'm so sorry.

I had to stop for gas and go to the restroom.  While I was pumping gas, I recounted the I-20 incident to my sister, who had already called me three times asking about my camera. Her response, "You only drive 60 on the interstate?"

I hung up the phone and headed to the restroom. And y'all, when I sat down.....the toilet flushed on it's own. I thought, "Gross, I am going to be mad, if I get wet." About that time, the lights turned off in the bathroom, on their own. At that point, I laughed out loud, right there in the public restroom of a convenience store just off I-20. I got funny looks from the clerk and a couple of customers when I left the store. I just assumed they heard me laugh and left it at that.

When I finally got home and told Cliff what happened.....

He said, "I wish you had gotten arrested. I would be taking all kinds of pictures of you."

I hope I don't have a stroke! Especially, before I get to the DMV office on Monday!