My Favorite Day...Biking From Jackson to The Grand Teton National Park - Day 5 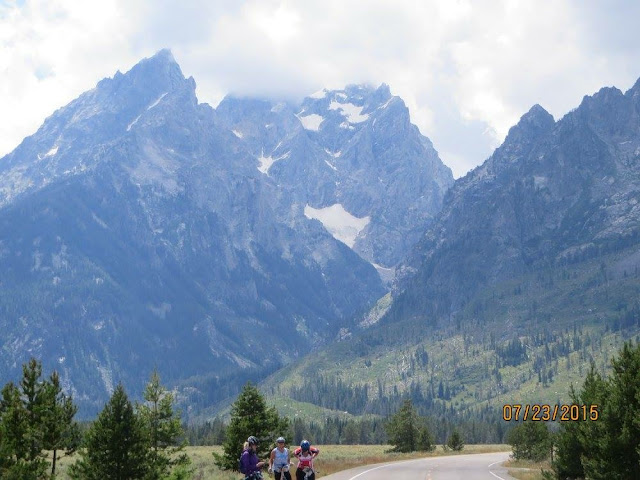 Photo compliments of my new friend, Elaine. That's me in the center.
This was our view for the better part of the afternoon.

I woke up feeling a little overwhelmed. I talked to Cliff the day before and told him about me nearly bonking and he told me to remember to take my gels and drink Gatorade and that I would be aight! I'm not gonna lie though, I was on the verge of tears at one point. The thought of nearly 50 miles and a lot of that going up had me all worked up. Sid, one of the guides, worked her magic, though. She gave me a little pep talk and some encouragement and I felt much better.

We loaded our luggage on the van, packed our snacks and then went to breakfast. I decided to go back to what I was used to and what I had been eating on my training. I had a bagel smeared with peanut butter and a piece of fruit.

After breakfast, we hopped on the bikes and headed through the town of Jackson, WY. We passed the park with the antler arches and continued out of town. We passed the picnic area where our tour would end on Saturday. It was around this area that we got on the bike path. 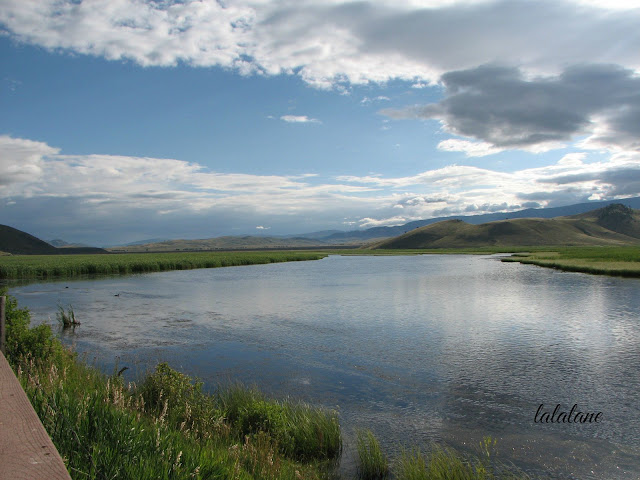 The bike path ran along here....Flat Creek, just outside Jackson, WY.
Heading north, we were on a very nice bike path. It was mostly flat for a few miles and then we had some gentle hills. We took a right and headed to a little town called Kelly. I believe it was at this point that we could see the Gros Ventre Mtn. range. Once on the road to Kelly, we were off the bike path. But there wasn't much traffic. A few miles down the road, we arrived at Kelly and a cute little coffee shop. The tour van was waiting there and we stopped for some nutrition and to refill our water bottles. 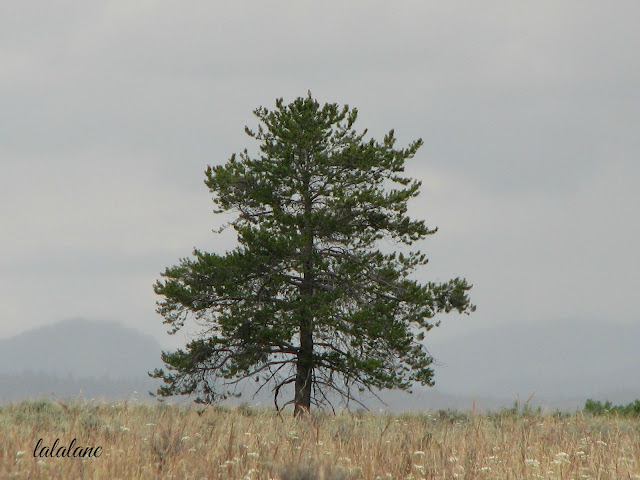 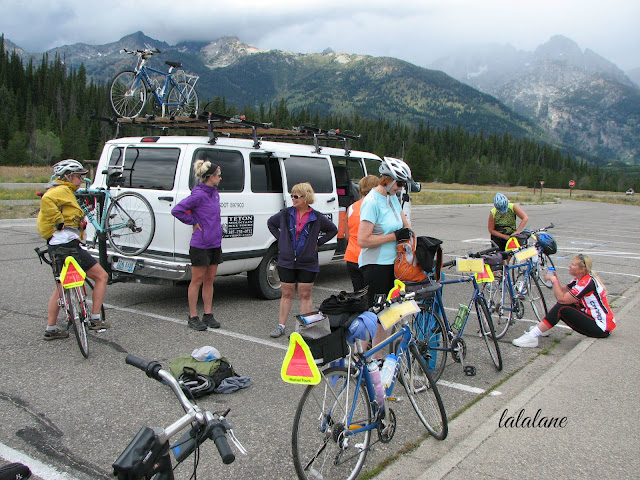 Snack break. That's my bicycle in the center. It looks like it belongs to a bag lady. Lol!
I believe in being prepared. I had a little bit of everything. 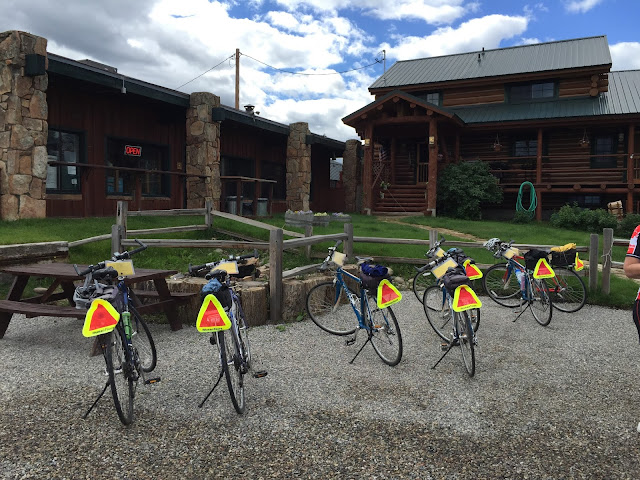 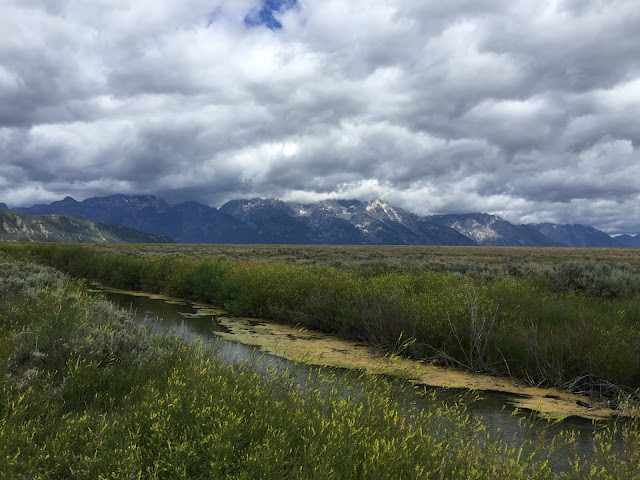 Crossed this creek on the way to the flats. 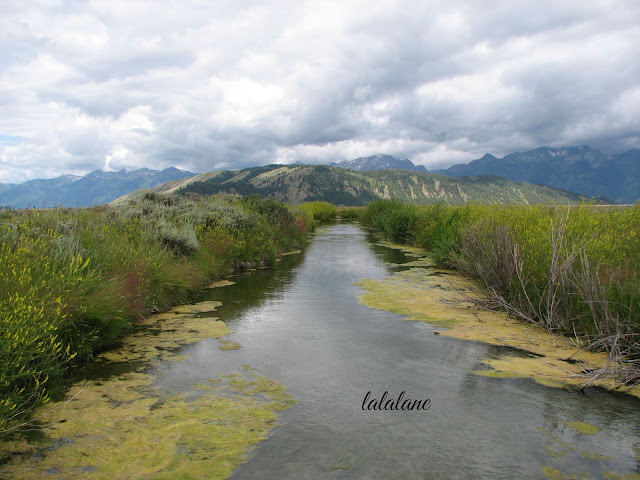 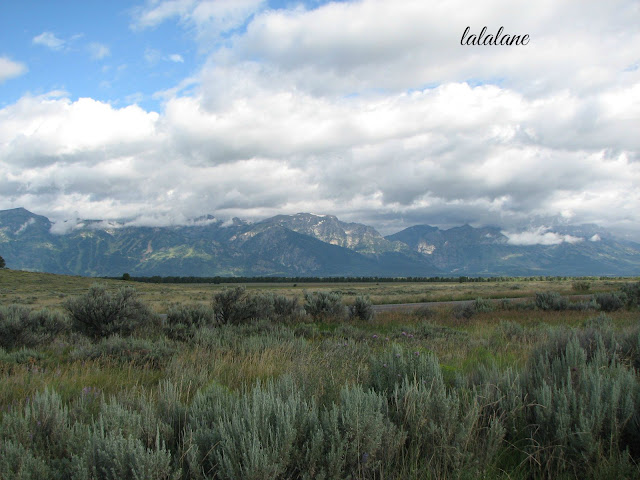 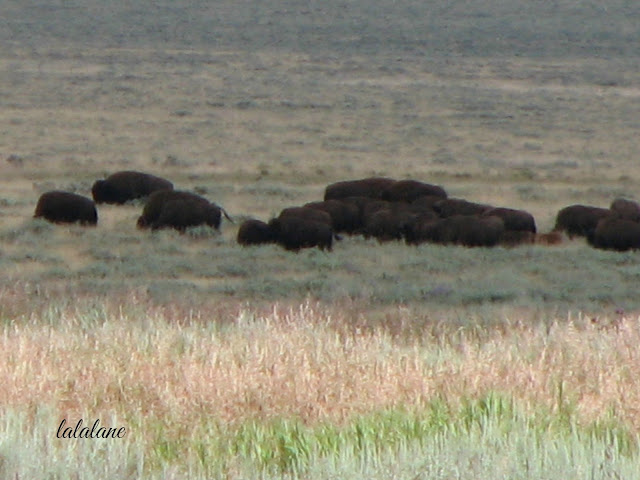 ...we saw a herd of bison off in the distance. 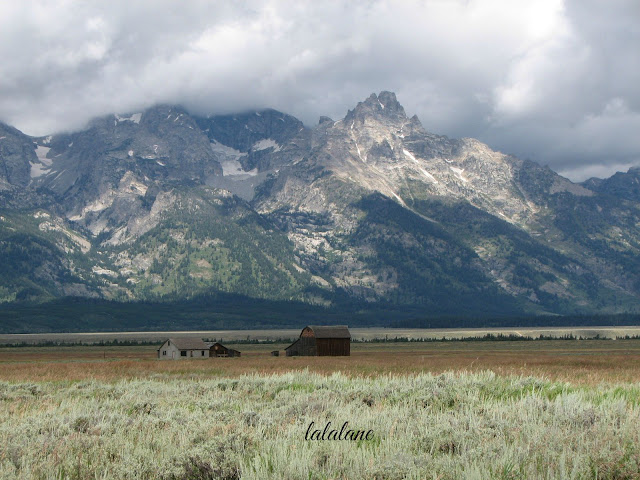 Leaving the flats, the Tetons are coming into view. 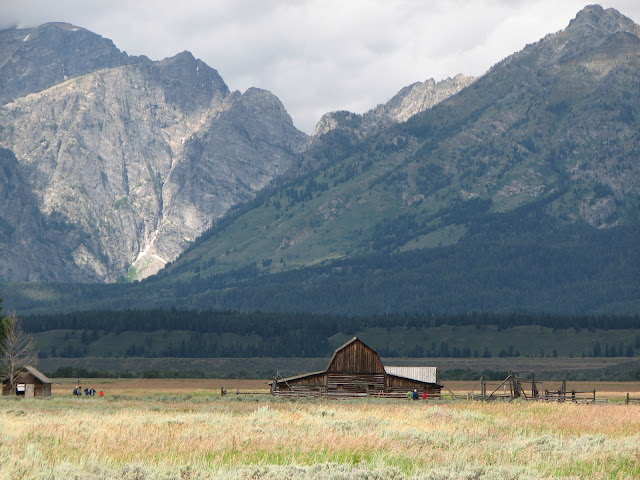 After leaving the flats, we were on the highway for just a little bit. Our next stop was Dornan's Restaurant for lunch. However, most of us packed a lunch from the van, which we enjoyed out front of Dornan's. We were now beside the Snake River and near the community of Moose. 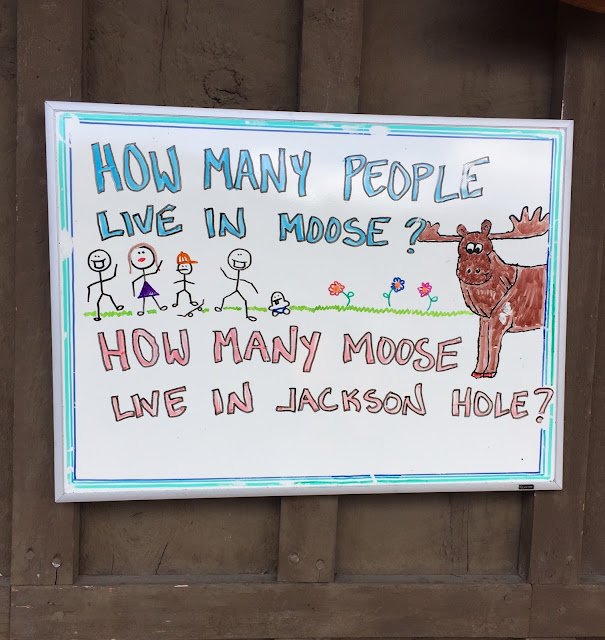 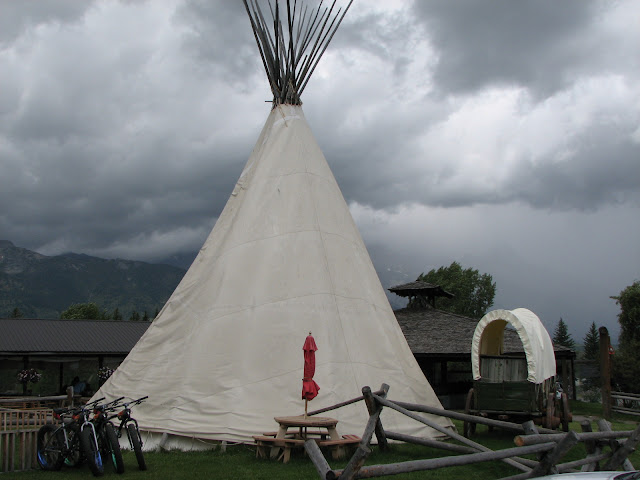 Ominous clouds behind the teepee would be bringing rain.
Yes, as we were leaving Dornan's, it began to rain. Just a short ride down the road we ducked into the visitor's center until it passed. After leaving the visitor's center, it wasn't long before we were entering the Grand Teton National Park. 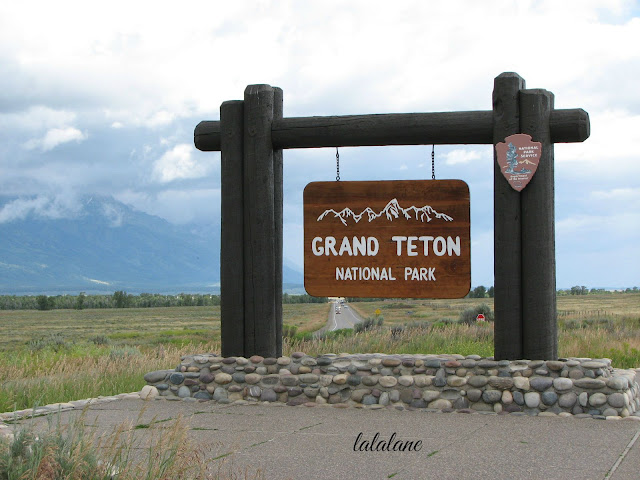 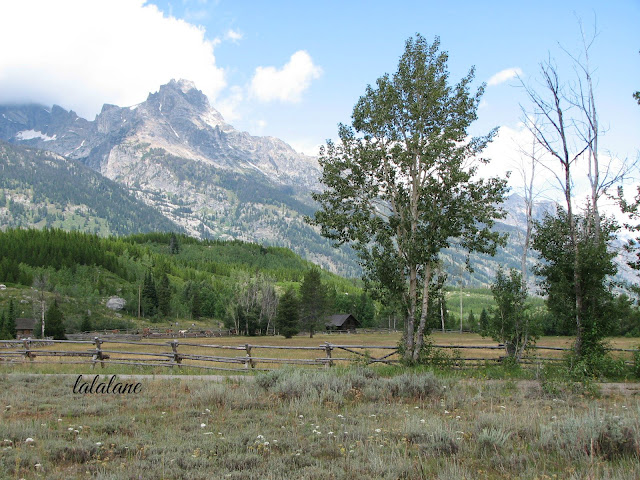 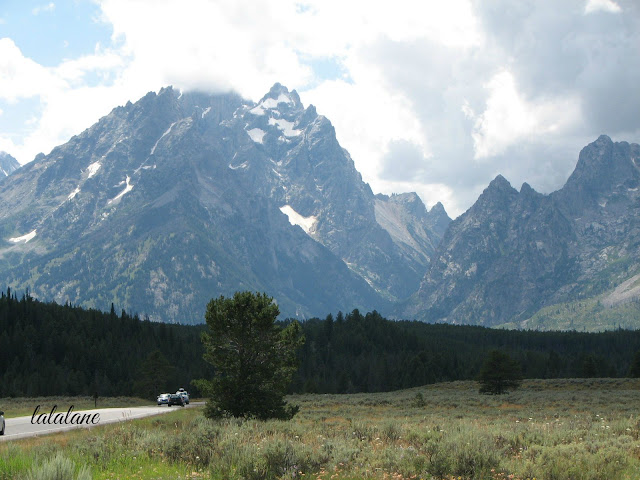 It stayed cloudy and we were dodging the rain, it seemed. And because of the clouds, it was a little cool, too.  It was starting to get hilly now, but the ride was so gorgeous that we didn't mind them so much. Our next stop was Jenny Lake. 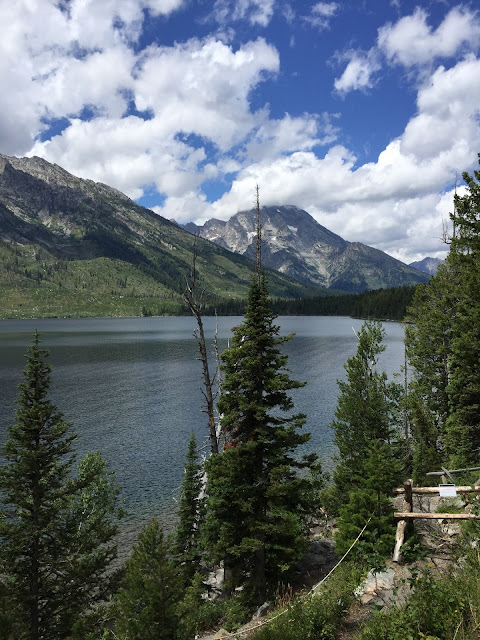 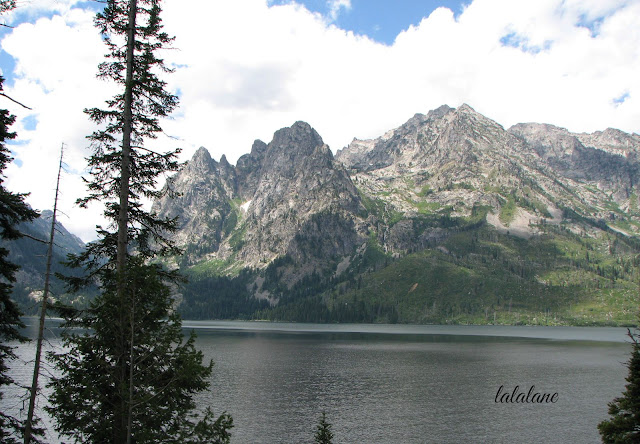 ﻿Jenny Lake
Leaving Jenny Lake, we rode through a wooded area. We were advised to watch for Grizzly and Black bears. If we saw any, we were told not to approach them for pictures.....but, to turn our bikes around and ride in the opposite direction. I had no problem with that advice. I was praying we wouldn't see any bears and we did not. I did notice the smell of the forest here. It smelled like Christmas trees. I took lots of deep breaths....it was glorious! Once we cleared the wooded area, we had approximately 14 more miles. They seemed to go a little quicker now and I was so glad because those uphills were challenging.
On the flats, we had the winds to contend with but we were able to hold 12-14 mph. On the downhills, 22-27 mph. But the uphills, especially near the end, 4-7 mph. It was tough. 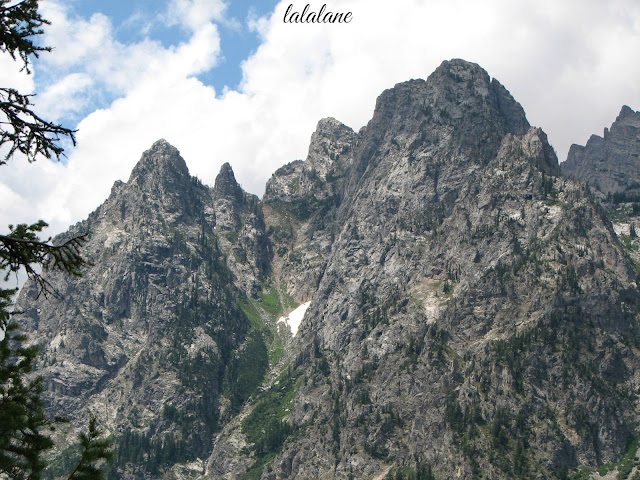 Further down the road and off to our left was Jackson Lake. We crossed Jackson Lake Dam, but didn't stop for pictures that day. We were nearing the end of the ride and I was just ready to be done. Only a couple more miles, but some hellish uphills were ahead. The last hill....I nearly walked! I actually came close a couple of times, but I could not.....I would not! I had trained for too long and had come all those miles.....there was just no way I would give up! I pushed through and finally made it. Just as we rounded the last curve, there it was....the Jackson Lake Lodge. I'm not gonna lie....riding into the parking lot, I cried just a little. I was so proud of myself. I had spent 3 months training at sea level where the only hill I had to train on was a bridge.....not to mention the elevation. Jackson Lake Lodge is at an elevation of 7000 feet. And then, those couple of tears turned into a grin that I sported for the next half hour. There was a lot of congratulations and high fives. We had just ridden 49 miles.
What a sense of accomplishment!!!!!
Today's Total Miles: 49.01
Total For Trip:   116.6
﻿
After cleaning up and resting a bit, it was time for dinner in the Mural Room. When you enter the Lodge's activity center, there is a set of stairs in the center that you climb to get to the Mural Room. When you reach the top, you are greeted with this..... 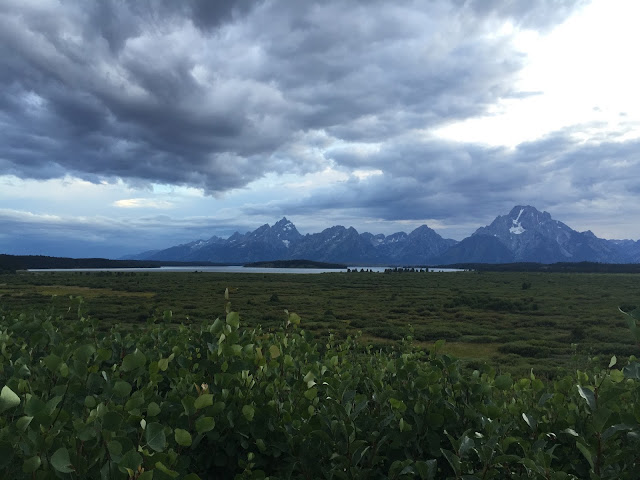 The Grand Tetons!
My favorite day!
Be back soon with day 6,
Laurie