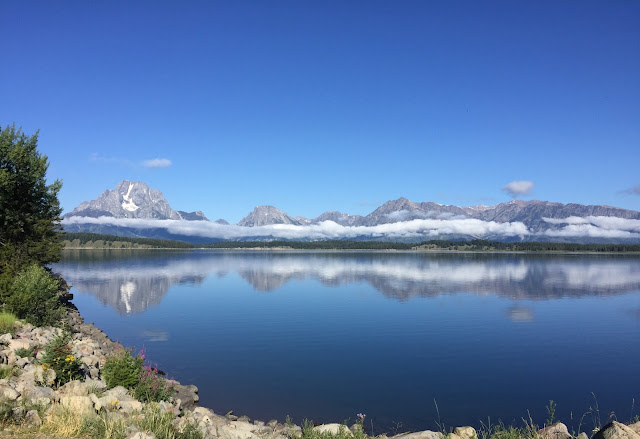 Lower end of Jackson Lake with the Grand Tetons in the background.
Saturday, July 25th, was the last day of our Grand Tetons tour. It has been a fantastic week. Each day was very different from the day before, except that the Grand Tetons was the common denominator. The Tetons are huge and can easily be seen for miles and miles away. Each days mileage and challenges were independent of the others, yet the beautiful scenery tied the days together in a tourish kind of way. For me, this was the trip of a lifetime. Although, I am hesitant to say that because I have been on some great adventures and I know there will be more. There will be more adventures, more tours and more trips of a lifetime.

The following account is of our last day on the tour. I didn't take as many pictures the last day because we basically backtracked the route from Thursday's ride. There was one change, however, that cut out about 10-12 miles or so. Instead of taking a left at Dornan's and heading back to Kelly, we took a right and got back on the bike path that leads straight to Jackson.

After breakfast in that glorious Mural Room, we had one last map meeting and then we were free to leave. Coming into The Grand Tetons National Park on Thursday, we crossed the Jackson Lake Dam. Cliff asked me if I took pictures of it and I had not because at that point, I was just too pooped. This was about 47 miles into our ride that day and once we crossed the dam, we had that last grueling hill. So, I promised myself that I would stop on Saturday and take some.  And you can see those below. ﻿ 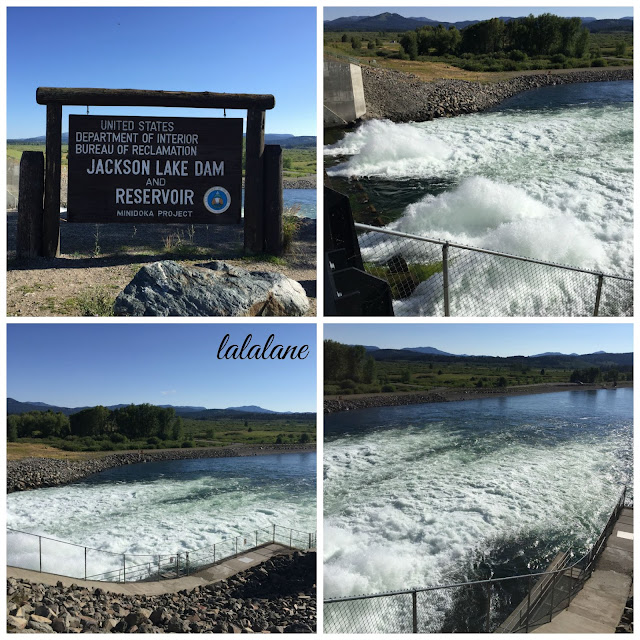 The pictures above show the east side of the dam....where it turns into Snake River...the river we rafted down for 10 beautiful miles. 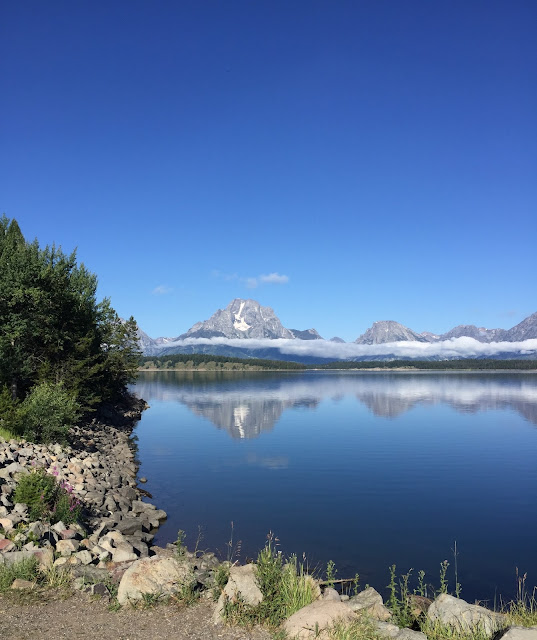 The west side of the dam looked like this....the Grand Tetons in the background. 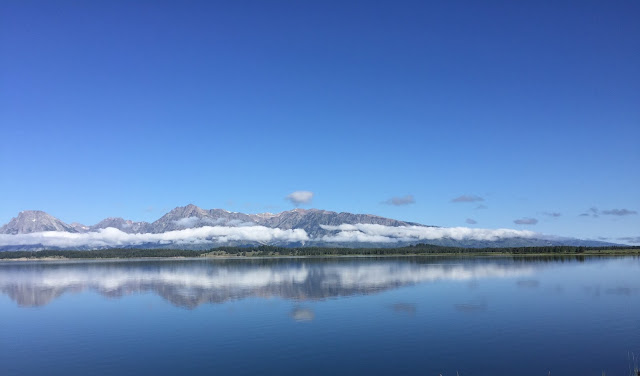 The pictures doesn't do the mountains justice. I mean these things were Gorgeous with a capital G. Majestic with a capital M and Breathtaking with a capital B.
I'm quite sure when Katharine Lee Bates penned the words to America the Beautiful, she had visions similar to those above.

Although we had only been riding for a couple of miles, the parking lot area had signs for the restrooms and Pete and I thought.....may as well. We have about 15 miles to the nearest restroom. The Dam people had the restrooms hid very well. We couldn't find them. But.....never fear! Have you ever heard of the green room? LOL!!  No? Well then, you need to learn about the green room. It's one of the top tricks of the trade. Comes in mighty handy. 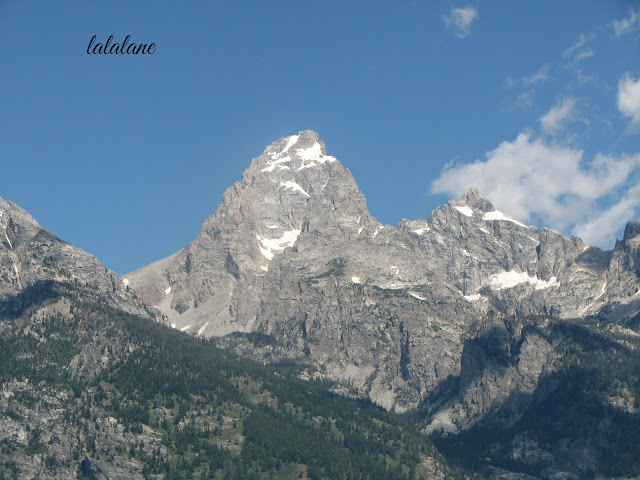 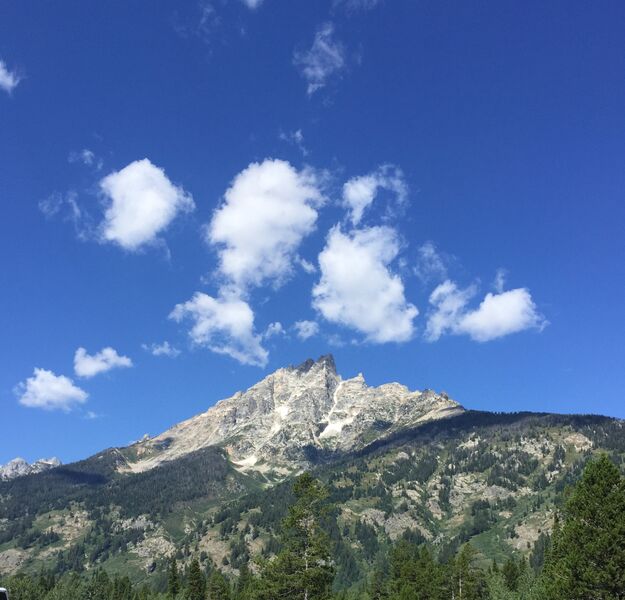 ﻿The first 15 miles or so back down were hilly. We passed Lake Jenny again, but decided not to stop for pictures. The way she had it figured, if we didn't stop as much to take pictures, Elaine would make her flight out with time to spare. We had already taken so many pictures of the area that we would be taking duplicates, anyway. So we pedaled on and on..... After Lake Jenny we were soon heading into some flat areas and it got windy. We handled it. We were veterans now. 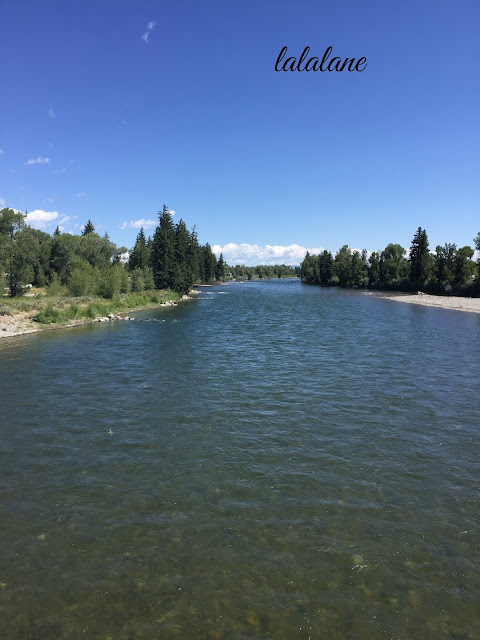 This is Snake River and the river that we rafted down. On the left, just beyond where the tall trees start is where we got off the raft. Across the river, on the right is Dornan's. The river is so shallow that you can see the stones on the bottom.

We had just passed the visitor's center and just over the bridge is Dornan's, but we didn't stop there, either. We passed under a small tunnel and continued right....we were now on the bike path that leads straight into Jackson. It was windy still, but the terrain was mostly flat. Along both sides of the path, wildflowers were growing. They were pretty, but I think we missed their peak by a week or so. However, there was something blooming with yellow flowers...and I think it may have been goldenrod. Goldenrod wreaks havoc on my sinuses. So I fully expected to get stopped up, which of course I did....within a few hours.

Sorry, I got sidetracked.

Anyway, the path continued like this for a few more miles. And just like that, we were at the road where Elaine would turn off and head to the airport. We stopped to say goodbye to Elaine and then  Pete and I continued on to Jackson.

Pete, Elaine and I had been talking about how quickly we had gotten back down from the Tetons. We were trying to place everyone on the tour. We came to the conclusion that we may be the first ones to arrive back. I was excited because that meant that I could tell Cliff that I didn't finish last, that in fact, we were the first ones to arrive to the end. So the closer we got to Jackson, Pete was so kind to let me take the lead. And we road into Jackson with a smile on our face....not really knowing if we were the first ones back, but because we had accomplished so much in a short few days. We were so proud of ourselves for having made such good time.

As we rolled into the finish, we were greeted by Sid and she said, "Yay, you win the yellow jersey"! We were the first of those to ride the entire 36 miles back from the Grand Tetons!

In just a short time, the others started rolling in, too. Every one was congratulating every one else. We were reflecting on the week and marveling at the beauty that surrounded us. And then it was time for our farewell lunch of salad and sandwiches, cut up veggies and hummus, chips and salsa and cookies. It was just right! 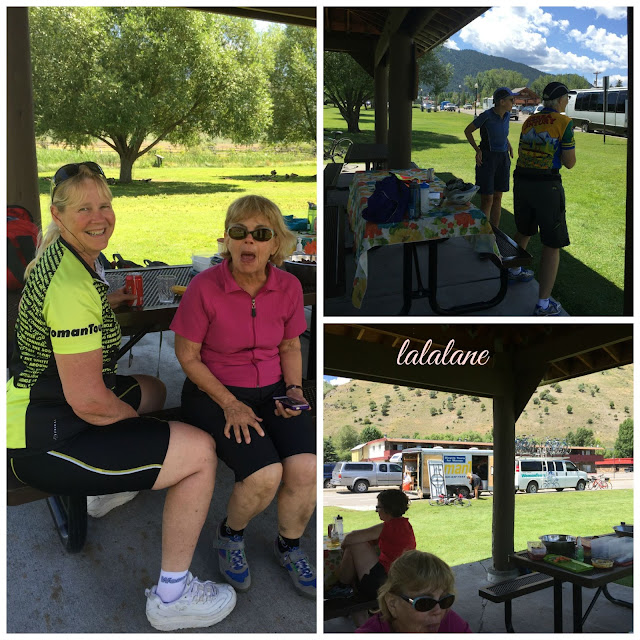 We all said our goodbyes, with promises of keeping in touch or looking each other up, if in the area. Laurie, a tour guide, shuttled those to the airport that were catching flights out that afternoon. And the few of us that were staying overnight at the Ranch Inn, walked the half-mile to the hotel. I spent the rest of the day alone. After getting cleaned up, souvenir shopping and later....dinner at a local organic, vegan café called The Lotus, it was time to call it a day...to call it a week and to call it the trip of a lifetime.﻿ 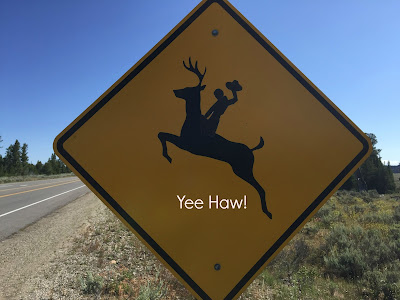 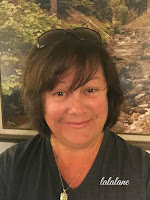