I know, you've been waiting all week on this one. What can I say, I've been as busy as a beaver. Between my yearly doctor check-ups, mama's doctor appointments, Sawyer's Kindergarten graduation, Lidia's awards program, overnight guests, work being done on our place at the beach and all the exercise I've been doing lately, I've hardly had time to breathe.  Today has been the first day in a week that I've had time to sit down at the computer to write.

Speaking of.....I have been getting lots of SPAM comments. So many in fact that I've had to turn on "words verification". I'm so sorry to do that to those of you who comment regularly, but I can't have crazy spammers commenting on my blogs either. If it just bothers you too much to go through the words verification step, I'll understand. If you truly want to comment, I know you will. Otherwise, I'm happy knowing that you enjoyed reading it.

Warning: It will be picture heavy. I had a hard time editing them. You'll see what I mean. 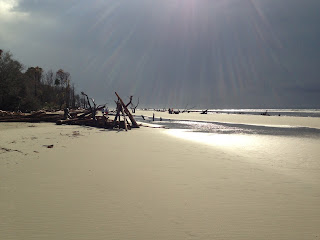 The best photograph of the day showing the sun's rays beating down on the surf and sand.....compliments of Cliff, himself.
***

Sunday, Cliff and I ran the Capers Island 10K. It was raining when we left home so I was a little worried about getting wet. It's the hair thing. I look awful in a hat, so I wear a visor. The top is out and the hair is exposed. What was I to do? Cliff's motto, of course, is screw it, just do it. So we did. We never minded the rain and journeyed on. 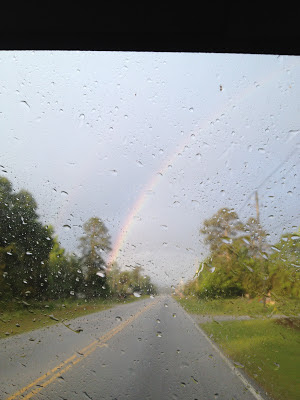 This is how our day started. Rain. But, look...do you see the rainbow? And just to it's left, there is another one. I took that as a double promise of good weather to come. 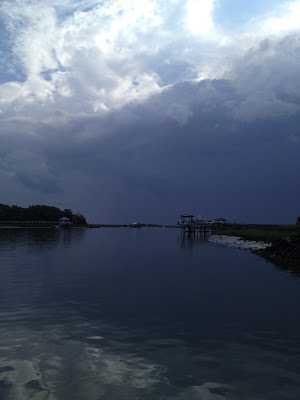 We arrived to the Isle of Palms Marina to ominous dark skies. The race coordinator said that the forecast looked promising...the rain would move out before the race started. Sounded good. We gathered our things and boarded the boat that would ferry us to Capers Island. It took us about 20 minutes to get there. On the way, we saw the lovely SC coast and some coastal birds, but the highlight was when a dolphin surfaced along side us. We arrived to the island, pulled the boat on shore (there was no dock, just sand) and disembarked. We were told to feel free to explore the island as they went back for more runners. The following pictures are just a few of what we saw.

Capers is an uninhabited barrier island just north of the Isle of Palms with about 3 miles of beach front. What makes it so interesting is that since the island's existence,  storms and tides have wreaked havoc on the shoreline. Cliff's description was so wonderful. He said, "The whole deal is the place; the island, the wide flat beach at low tide or the high tide that flows right up into the forest of Palmettos, small oaks and pines. And as the ocean has been taking 15 feet of beachfront annually since time started, the trees have been uprooted, bleached by the sun and sea, and rearranged by nature’s order. The result is an awe-inspiring primitive appearance as if you’d gone back in time ... an incredible place!" 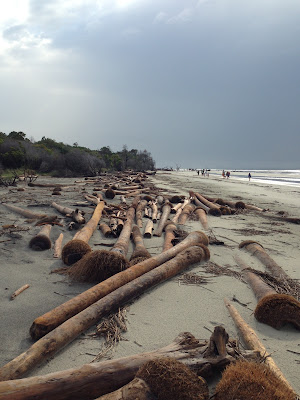 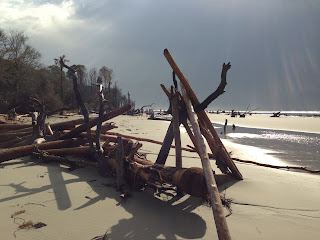 Trees arranged by the tides. 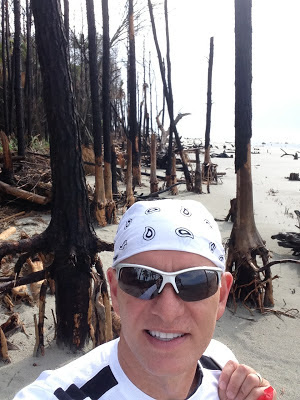 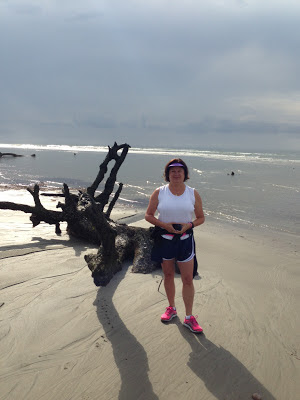 After what seemed like an hour of being on the island, everyone had finally arrived and it was time to begin the run.

Capers was the neatest, hardest run I've ever done. Donations and proceeds went to help the hungry. There was a start line, a bell rang and you ran. No need for numbers or chips. You kept your own time. No awards or prizes. It was just for a good cause. 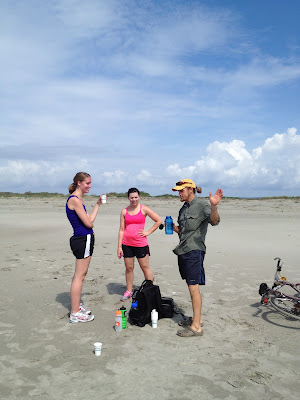 Water was at the 10K turn around and at the finish. 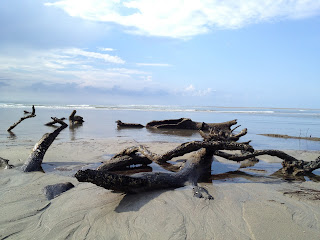 We ran through the bone yard as it is called because of the many trees down along the beach. 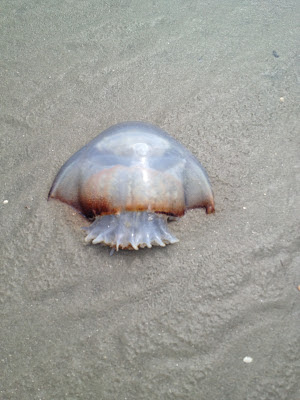 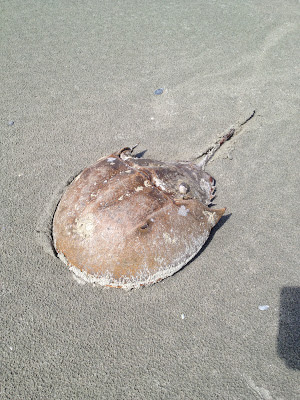 and horseshoe crabs (she was alive and making her way back to the sea). 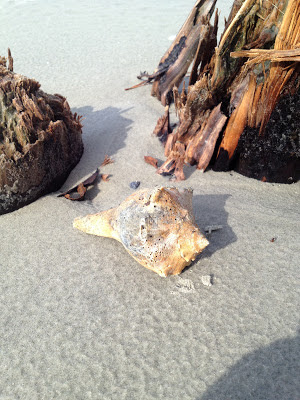 As picturesque as it was, running on sand is HARD! I'm convinced that running a 10K in sand is the equivalent of running twice that far on pavement. That's just my novice judgement, of course. But close, I feel sure. 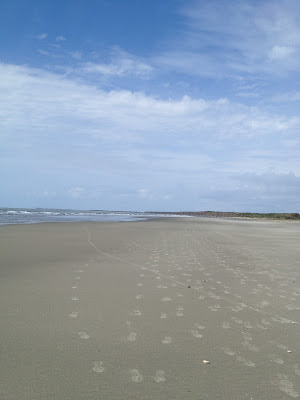 This was the view at the half-way point as I turned and headed back to the finish line. It was a  l.o.n.g. way back!

If you're from the south or know anything of our weather, then you know that in the summer after a rain, the temperature is sweltering. And that's just what happened today. It was hot and humid! I felt like I became dehydrated. I didn't carry any water with me, just depended on what the race provided. 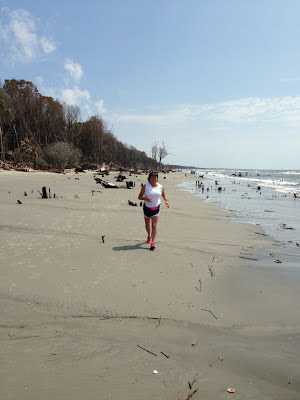 This was me at mile 5. It was taking everything I had to keep going. Right about now I bet you're wondering if I have any other running outfits. Well, yes, I do. But, I like these shorts. They're comfortable and on a day like this, comfort is key. 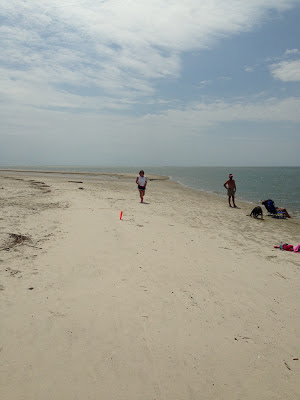 Nearing the finish line. See the orange stob. That's it! 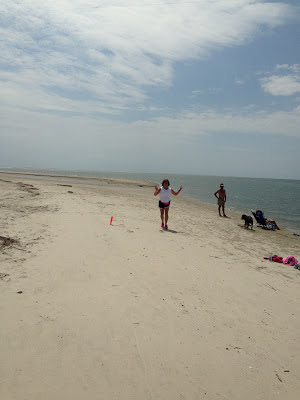 OMG! Never so happy to see a  finish line in my life!

Our coaches told us that running in the hot weather will be difficult and not to worry about our pace; we will slow down because of the heat. I did not run my best pace....I finished it, though, and I'm proud of that. I finished in 1:21. 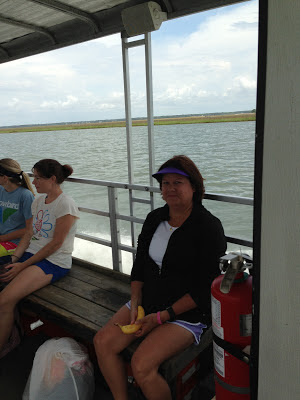 Here I am on the boat back to the Isle of Palms.

This was taken right before I got sick. I felt a little nauseated at the finish line. I drank several cups of water and walked around a bit to cool down. The nausea lifted for awhile but, about 15 minutes into the ride back to the marina, I got really nauseated again. This time it made me break out into a cold sweat. I was doubled over holding my head in my hands hoping we would get back before I spewed all over everybody....especially the dude sitting across from us who could do nothing but stare. I guess he didn't want to miss a good puking event. Anyway, we made it back to the marina just in time. I headed straight to the bath room, wet some paper towels and cooled myself down some more.

Haven't felt that bad since I broke my arm in a bike riding accident and spent a little time in the E.R. They pumped me so full of medicines, half of which I'm probably allergic to. Anyway, that resulted in a hurling event  that quickly cleared the lobby in the hospital entryway.

Feeling slightly better, Cliff and I thought lunch would be a good idea. The restaurant at the marina looked like as good a place as any. We got our menus and nothing, NOTHING looked good to me. Cliff ordered a hamburger and fries with coleslaw. I didn't feel like eating anything really but, saw french toast and decided to give it a try. It came with fruit....good thing! Because on my YUCK, that french toast was nasty!  I ate the fruit and some of Cliff's coleslaw and drank 3 glasses of water.  After leaving the restaurant, I told Cliff that I felt like I needed something salty. He said that I was probably dehydrated and that he would stop somewhere so that I could get some peanuts or something. Just a few miles down the road, we stopped at a convenience store and as soon as I walked in my eyes landed on BIG PAPA! Just what I wanted and needed. Cliff was like, "OMG! Yucky french toast, coleslaw and a Dill Pickle? You might as well drink some of my chocolate milk and go ahead and puke". Ha Ha! 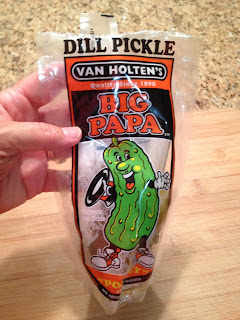 The end to a long but, good day. The run was absolutely beautiful, hot and HARD. I was wiped out for the rest of the day but, it was well worth it. A run to help the hungry, on a beautiful barrier island with my husband.....it's a good thing.