In Case You Were Wondering 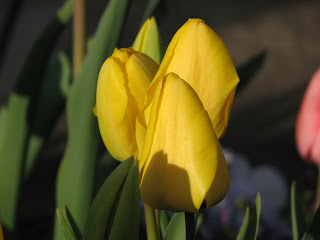 Thought I would give you a run down of the week.....just in case you were wondering.

It rained buckets last Sunday morning. I had a planned training run with a local running club in Myrtle Beach and was hoping the rain would stop in time for the run. About mid-day, it stopped long enough for the powers-to-be to announce that we would indeed run. Yippee!

I left home about 30 minutes before so that I could get in a good warm-up. On the way, it started to rain again....just a strong drizzle really. But as luck would have it, Murphy and his law showed up. I have a crazy window in my car that will roll down on it's own, if you don't keep the windows in the locked position. Well, for some reason, the locked position didn't matter that day. The danged window rolled down anyway. I started talking to myself and to the window. It was a mess. No matter what I did, I couldn't get the window to roll up. So, I pulled into the mall parking lot, got out and opened the crazy door and starting tugging on the crazy window.

I was making a scene. People were watching. Thought they were about to call the Mall Cops. Decided I better get back in the car, just in case. A mall parking lot arrest would have been scandalous!

Anyway, thought I was gonna have to turn around and go home. I couldn't leave the window down. I had a very valuable (worth tens of thousands of dollars, if you know what I mean) framed college diploma in the back seat that I needed to send to my daughter in Colorado. I also had my purse that I could hide, but what if? And hello, it was raining again! I made the decision to proceed with said plans. If it was meant for me to run, then I would figure something out. Lo and behold, just in the nick of time, I tried once more and the window rolled up. Hallelujah! Run is on!

The run actually turned out to be intervals. We warmed up by running a slow half mile. Then we were to run as fast as we could for a quarter of a mile out and then either walk or run slowly a quarter mile back to recover and then repeat that 6 times.  Well, little miss competitive here decided to go for broke. I hauled hiney. The coach was right beside me. She was saying, "That's the way to dig, good job, keep it going....etc." And then about half way, I felt like my lungs were going to explode, like my chest was going to shoot them right through my throat. The coach was saying, "Ok, you are going into glycogen depletion, this is normal".  Normal? Is it normal to puke up a lung? Ummmm, what did I get myself into? Well, I guess she knew what she was talking about. I made it to the end, bent over double and heaving, but by golly I made it. And we did that 6 times. Let me tell you, I felt GREAT afterwards! Must have been a runner's high. I am definitely going back!!

Monday:
I did a triathlon at the gym with my husband. Holler! My first ever. Swam 300 yards, biked 5 miles and ran a 1/2 mile. Another realm of exercise and fitness that was not in my vocabulary nor did I want it to be before. But, let me tell you....it was awesome! I am definitely going to do that again!!

Earlier Monday, before going to the gym, Cliff and I went to Brookgreen Gardens. The tulips were starting to bloom and the daffodils were still hanging around. It was so cold and the wind was blowing so hard that we didn't stay too long. We took a few pictures (see below), had lunch and called it a day.

If you are ever in this part of SC, you owe it too yourself to stop by Brookgreen Gardens. If you do, let me know...I have connections on the inside ;) The gardens are beautiful. I wish I had more pictures, but like I said....it was too cold to stay long this time. 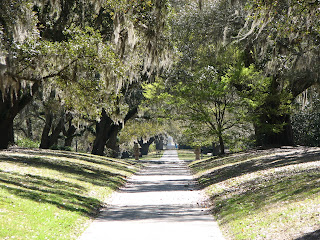 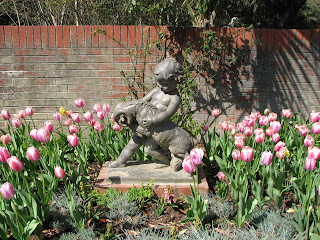 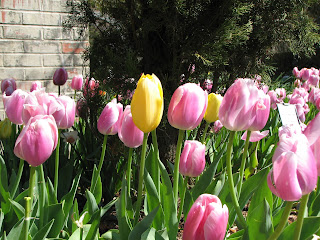 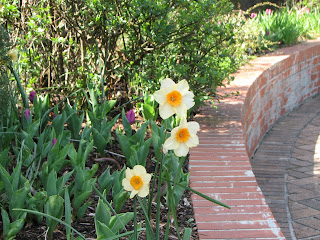 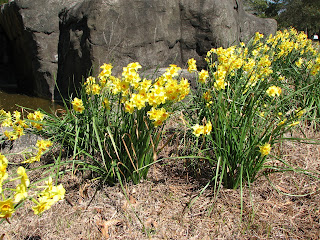 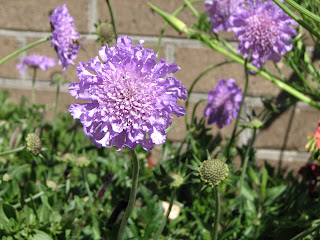 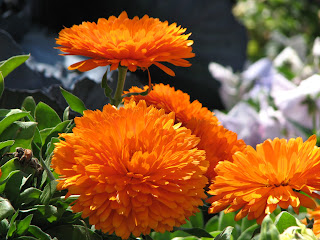 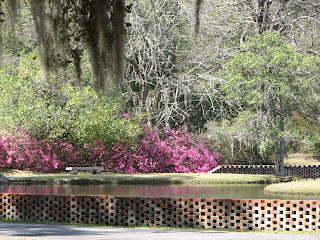 The azaleas are starting to bloom.﻿ Gorgeous!

Tuesday - Friday:
Sawyer has the flu and I've kept him all week, while Emily worked. He's been a sick little boy. When Emily brought him to me this morning, I asked if he felt better. He said, "Yes, and  I lost the diarrhea". Bless it! That was the worst part for him.

Well that wraps up another week on LaLa Lane. Got lots of running to do this weekend. I'm running an 8K race tomorrow at the Inlet and then an Easter Sunrise run on the beach, Sunday morning. That should be glorious!  Sure hope you all have a wonderful Easter. And as my daughter just signed off on a text message,
PEACE!﻿

Laurie
Posted by Laurie at 3:18 PM